Waves won’t bar me from the Isles of Shoals

To the sailboater who came by to check on us, thanks, but we were fine. To the other boat who was worried about us and called the coast guard, you could have just come asked us yourself. To the first coast guard boat, thanks for coming and checking up on us, we’re doing fine, and we’ll call when we get back this afternoon. To the second coast guard boat, geez, we aren’t late getting back yet or anything. Thanks for the escort though.

It was a lovely day. One of the first sunny ones in a while. Tyson and I were joined by someone he’d met via the online forums from one of the paddling clubs he’s recently joined. This guy will actually be one of our competitors in the Blackburn next week, but his paddling partner was busy today, so he was paddling his solo. We kind of sized each other up at the put in when we met and decided that it seemed like a reasonable chance to paddle out to the Isles of Shoals. These are some islands 6 miles off the coast from Portsmouth.

Going out was kind of slow because there was an opposing wind. There were enough waves that my gloves got pulled off the deck. I apparently hadn’t secured them. So we backtracked and picked them back up. The worst part of paddling out was actually the last 30 minutes when I really had to go to the bathroom and we were almost there but not there yet.

We sat on the main island and enjoyed a nice lunch. The weather really was awesome compared to the Seattle imitation we have been enduring recently.

Then we paddled back. The wind had been blowing for long enough now that there were white caps. Unfortunately we were going a little sideways to the wind so we could not quite surf the waves. The combined wind and seas still managed to take us home at a reasonable rate even though we weren’t paddling too fast.

There was this one little bird that was nifty to watch. It was a little black and white thing. It flew right above the water up and over the waves and back down into the troughs. And all the while it was skimming its feet in the water.

On the way out we also spotted a dead seal pup in the water. 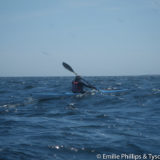 Next up: Last prep before the race.

I looked at the various NOAA observation stations near where we were paddling. It looks like we had 2 foot seas going out and 3~4 foot seas coming back. Although the waves were choppy enough coming back that some of them peaked a bit higher. At other times it was flatter.

The more interesting bit is the wind measurements from the Isles of Shoals — our lunch stop. The following table is excerpted from NOAA. WSPD is the wind speed in knots. So we had a 26 knot quartering tail wind on our way back.