While doing laundry at Bullfrog, we debated what to do with our two remaining days out in Utah. We considered all of the other major parks. Tyson in particular wanted to show me Arches and The Needles which he had seen before. We ended up deciding to stay with Capitol Reef because that is what we had the guidebooks for and I had researched it the most. Also this way we could cross it off entirely for the next trip. We had seen plenty of the southern end of the park, so we were primarily looking to find a different aspect to see. We settled on a slot canyon in the center of the park. To be safe, we checked the weather multiple times for possible rain since slot canyons have serious flash flood danger.

Once again we got up bright and early, this time because of the drive to get back north. There was no real direct route. But the route we took gave scenic vistas of eleven thousand foot mountains. We stopped for breakfast on the way. Once at the parking lot, we were greeted with a large expanse of open desert shrub-land. It was not clear to us how in the world there was a slot canyon hidden less than three miles away. But eventually we did find hills that grew into a canyon. 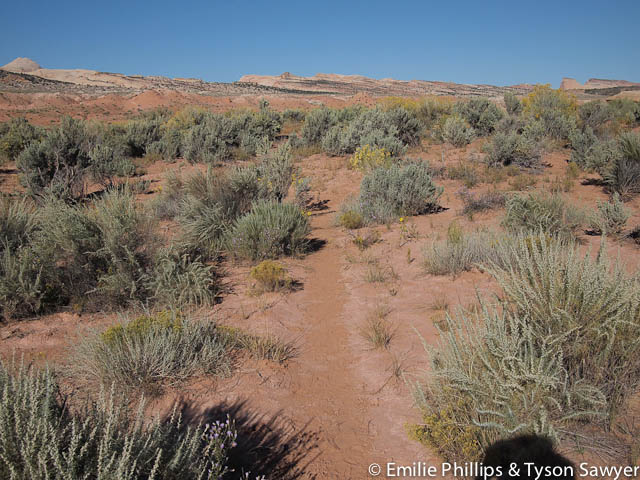 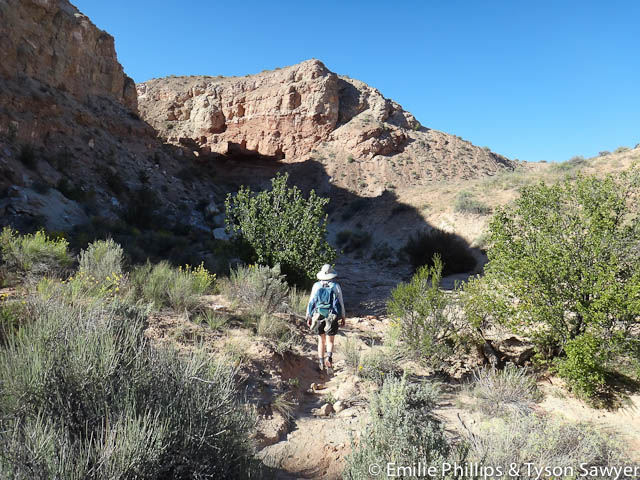 Once we got into the canyon, you could see how the water had sculpted the rock and the sand. There was a fine red coating on both which made it hard to tell what was sand and what was rock until you disturbed it. 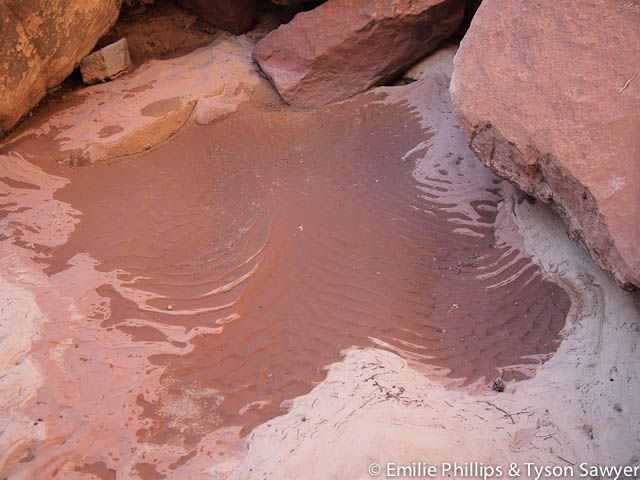 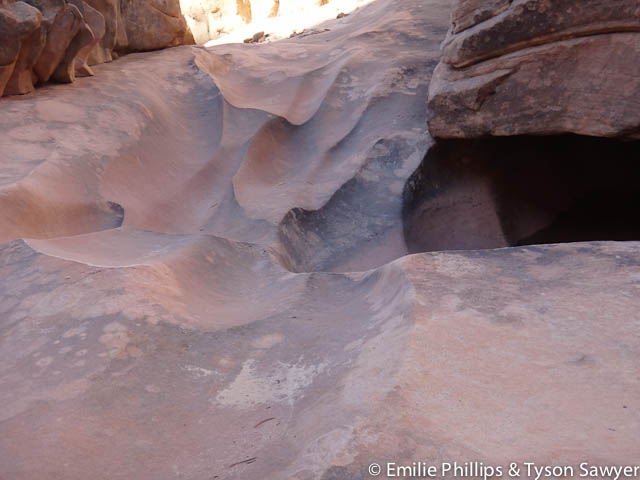 The first part of the canyon was open nice hiking with occasional rock scrambling. I had been hoping for a little less sun given the slot canyon description. We got to the first pool of water and decided to climb around it rather than switch into our water shoes. The climb was not too bad, and there was plenty of sandy open hiking afterward, so I’m glad we stayed in boots. 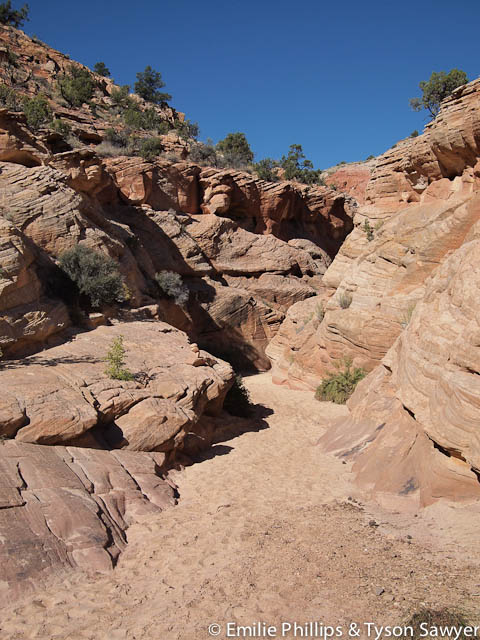 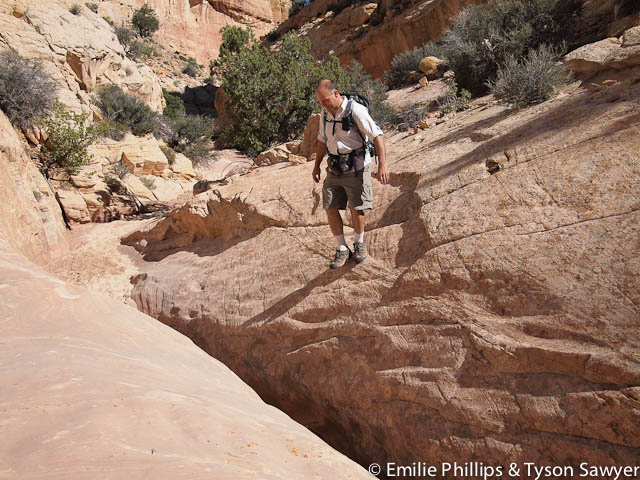 Then we got our first taste of slot canyon. It started not very tall or intimidating. Then it opened up again. And then it narrowed up and rose above our heads. The packs came off and had to be carried. In some ways it was kind of like a cave, but in others not. It has the same beautiful carved rock. But at least that section was dry and reasonably well lit. 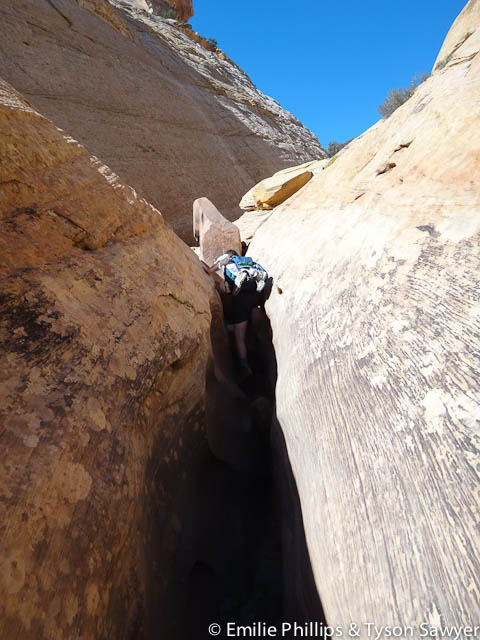 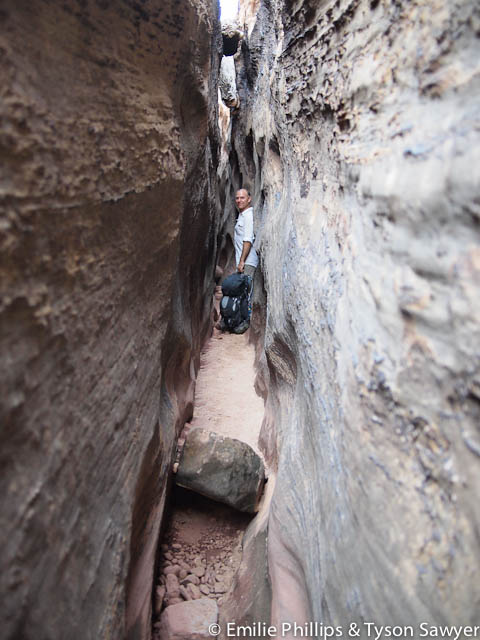 Around the bend we came to another pool. We stubborned it out and chimney across well above the pool. There was one chock stone part way along the traverse to stop and rest on. At the far end of the pool the floor came up a rock to our level. So it worked out with a bit of grunting. 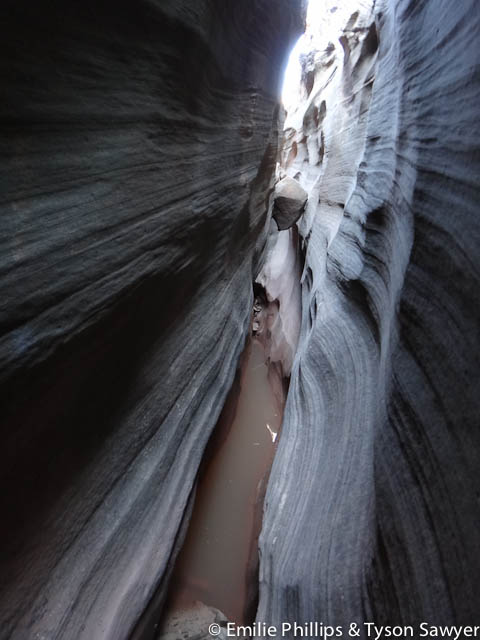 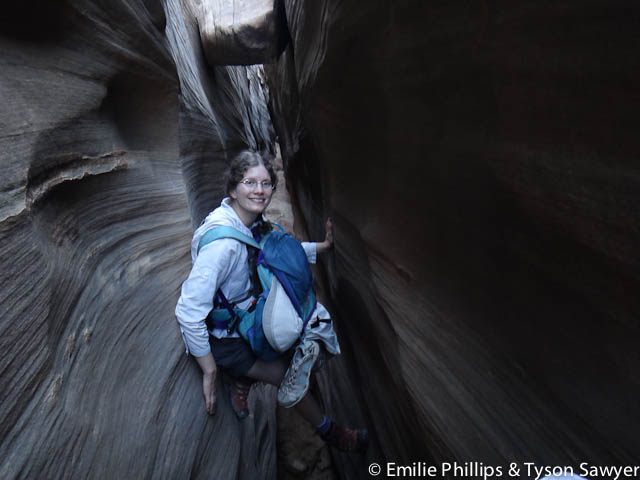 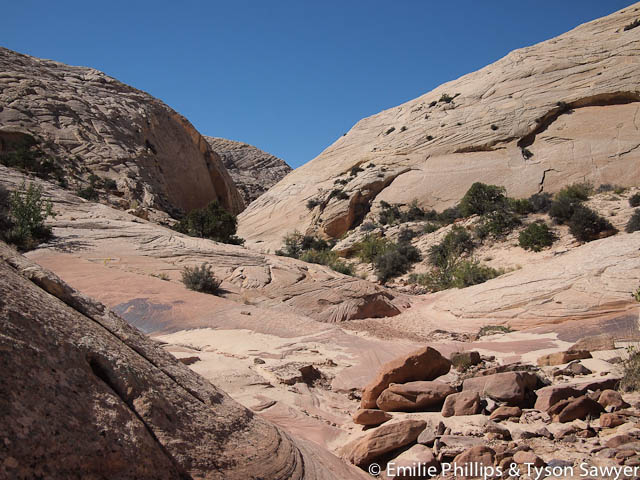 The next time the bottom of the V got to head level, there was water at the bottom again. Not particularly nice looking water either. All the smelly biological mater is definitely a difference from caving. I did a little scouting to see if we could once again avoid the water. The slot at the bottom of the V was straddleable, but I was not quite sure if we were facing a general widening of the slot that would leave us high with a nasty drop off. So we switched to our water shoes and stashed the boots. 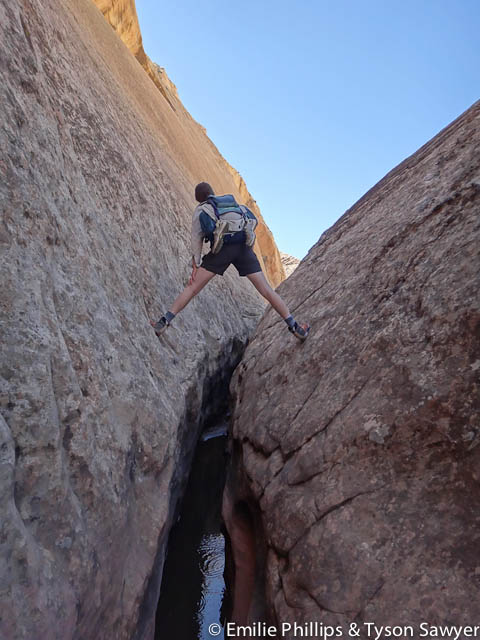 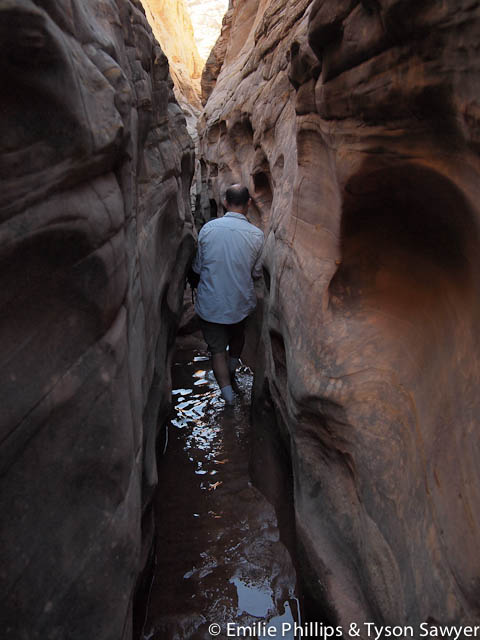 It turned out we possibly could have made it across the top, but definitely with more effort. The walls at the far end of that section of slot suddenly receded, but Tyson was able to climb up and get a view. The next bit was a mix of not too tight slots and medium size openings. We hit a few more water sections, so switching to the water shoes was quite reasonable. The only downside of the water shoes was our traction on the rock was now horrible. The water pools did not always have flat bottoms. 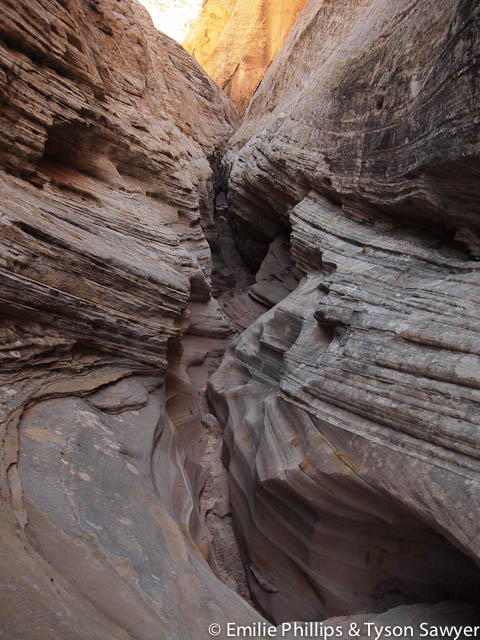 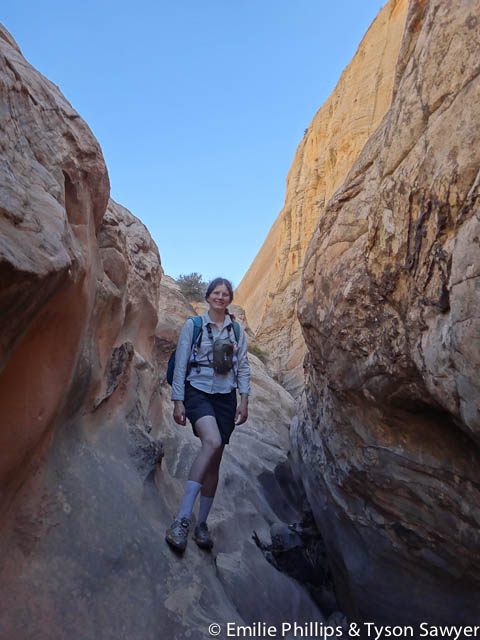 We hit one last big opening. Tyson clambered up one side and I the other. By then the overall canyon was getting reasonably deep, so the walls made for nice views of weather and water smoothed rock. Next was exhibition A on why we wanted less slippery shoes. To start with, the water was particularly fowl with dead biological mater floating in it. Tyson tried in vain to climb the sloping slide wall. I made it two steps farther than him by starting with drier shoes, but then I was just going to slide down into the water. Next Tyson discovered that under the water, the walls were quite as steep as above and the left side went down farther than any of us wanted to go in that water. I forget how Tyson got across. I found a little ledge under the water and scooted my feet across that while opposing with my hands on the far side. At the end there was an overhanging rock that you had to climb up. It took Tyson a while to get that one. I chucked my pack up to him. 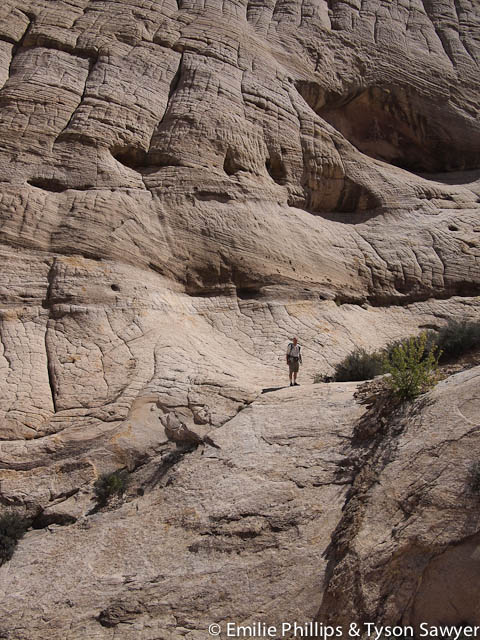 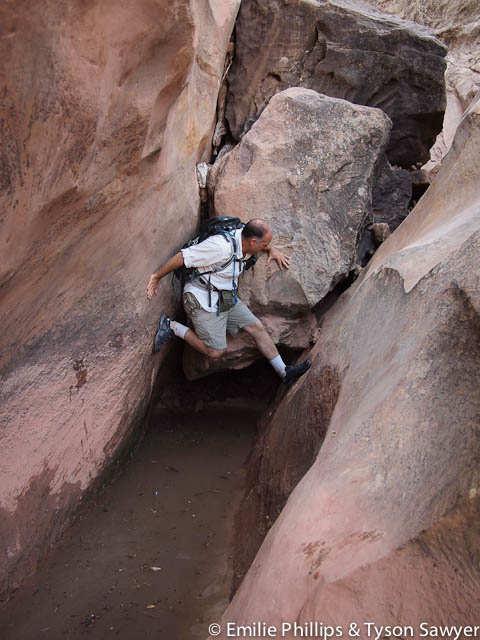 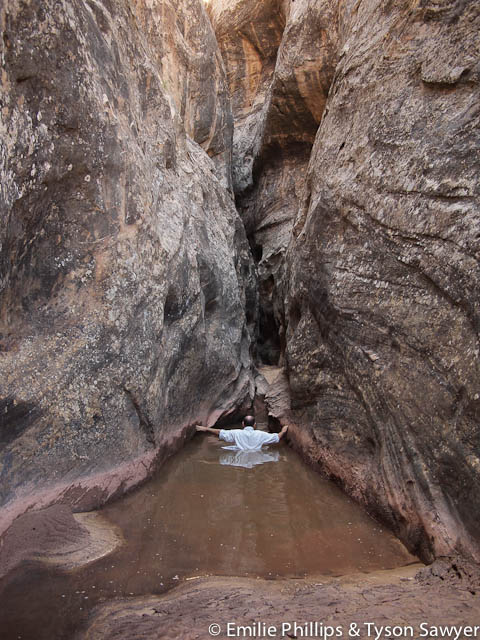 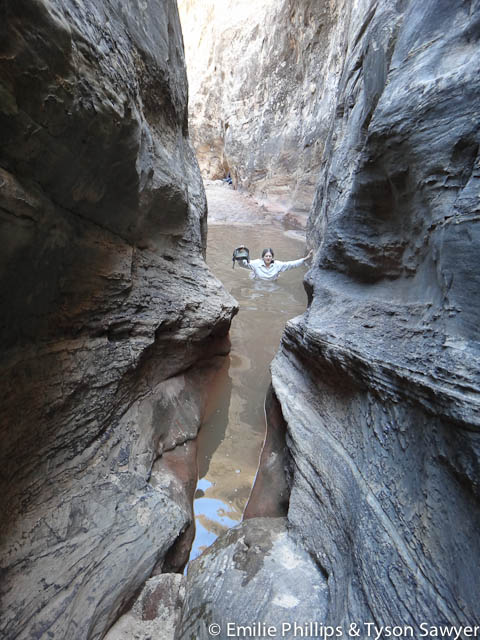 The remainder of the canyon was well worth the water. It continued being narrow and quite tall, and just generally beautiful. There were a few small obstacles to work around, but nothing major. At the very end is a tall round chamber where the water flows in from high above. To Tyson’s dismay, there was a rappel anchor at the top. 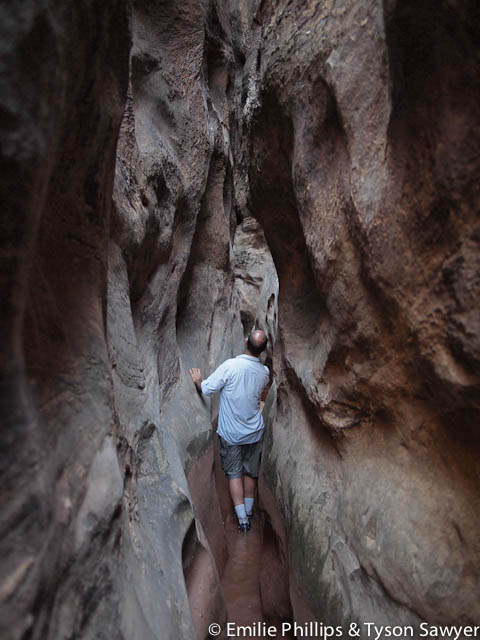 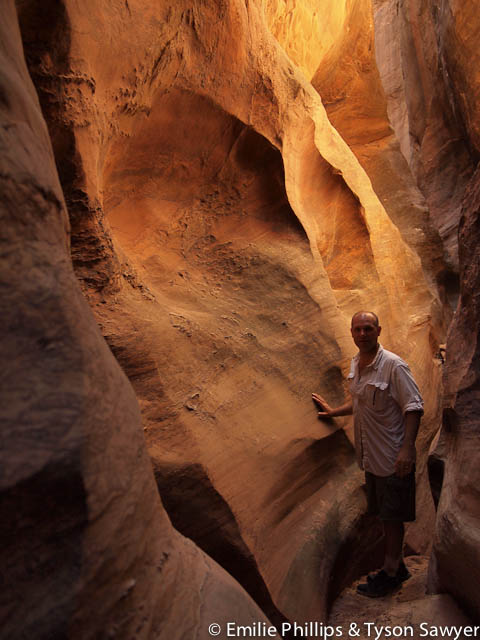 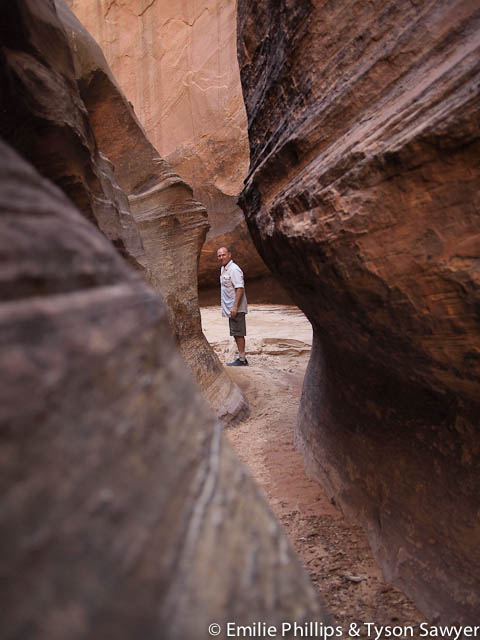 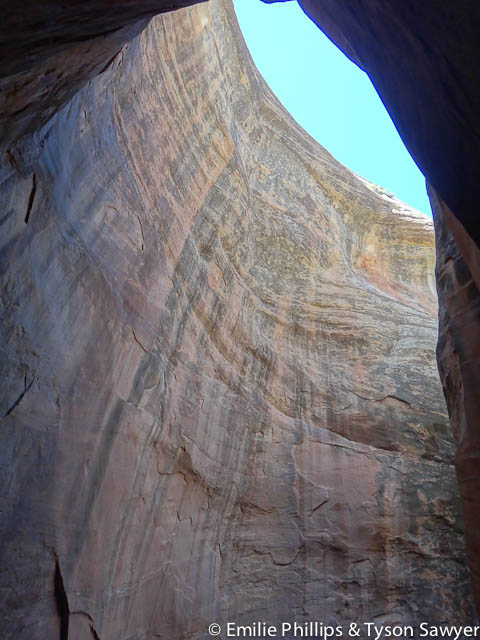 Then we headed back out. The way out was much the same as the way in (meaning, stunning, awesome, and fun). We left our water shoes on until we were past all the water. That meant we ended up with quite a bit of sand in them. And we discovered the first water feature was a good deal deeper than we expected. We saw more lizards, and I tried to sunburn my legs. As we were heading back out the open flat terrain, I looked at my camera and noticed I had about a thousand photos already from the trip. 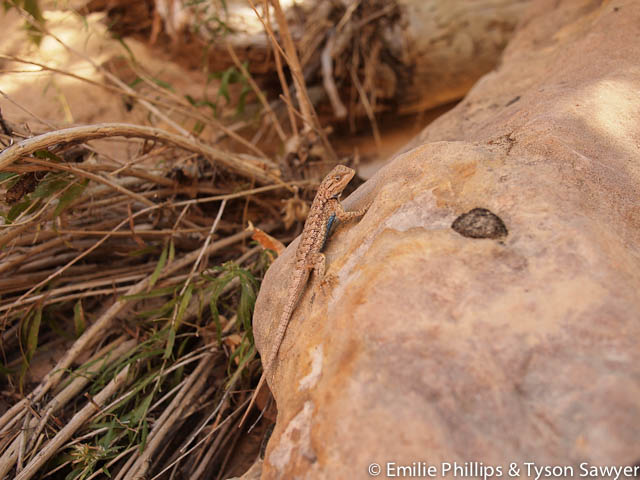 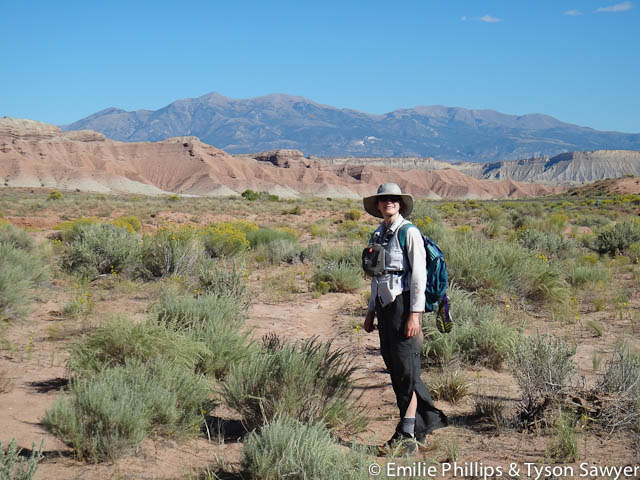 At the end of the day we drove by the visitor center and stopped to see some petroglyphs off the side of the road along with a host of other tourists.

Check out the photos. There are lots of good ones. The hike up the wash to the canyon was mostly edited out because it looked just like the previous days.

The GPS had no reception in the slot, so this track was recreated afterwards.