For the last day of our trip, we decided to go to the north of the park. Between our two guidebooks we found a couple of different routes all in the same area. The night before we stopped by the visitor center to see if we could dispose of our partly used fuel bottle and get a map. They did not have a map for either of the routes, but I got an aural description that made one of the routes seem easy enough to follow, and the commentary that no one ever goes out that way.

We got up early again. This was both because we wanted to do the hike in the cooler morning and because we needed to head back to Salt Lake City afterward. We headed off down the road and I checked the map for the turn off and started reading the description of the scenic drive to the trail head. About the time we got to the turn off, I got to the section of the road description where it said “The loop can be done in either direction, but we favor the clockwise approach. This gets the river ford accomplished first.” At which point I thought “ford? Well, the ranger did not say anything about it. Must be no big deal.” What we found was that the road split into several branches before the river. All of them ended at banks above a creak that looked impassible except by swimming.

Plan B: We did not really have a plan B for where else to go hiking, so we decided on a plan B for how to get there. We drove west back out of the park, north up into Fish Lake national forest, up over a nine thousand foot mountain with alpine vegetation and aspen in fall color. As we dropped back down the other side, the greenery disappeared, and it went back to desert. The road in the forest was ok. Most of it was a decent dirt road. Some of it was quite steep and a little questionable to get back up with 2 wheel drive. 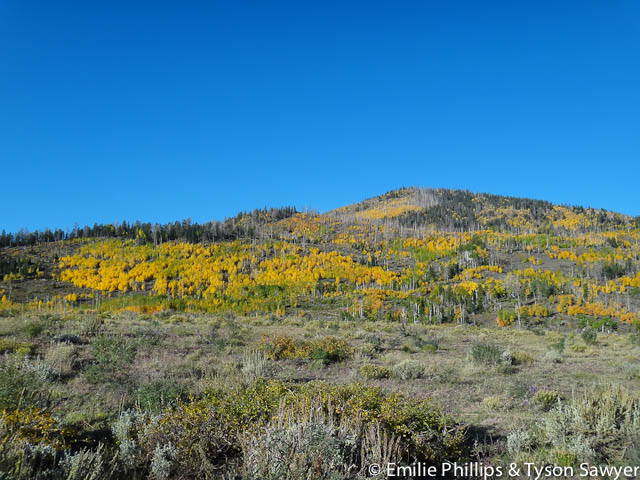 We crossed back into Capitol Reef and picked up the scenic loop. It was sandy and rocky and frequently washed out by crisscrossing washes. Tyson had an interesting time of it. We had a high clearance rental car, but he sure was wishing for four wheel drive. And I was thinking about what we could do if we got stuck, especially since there was no one out there. Five hours after getting up, we arrived at the trail head. We also found three other vehicles there and people visiting the overlook. They all had come up through the ford somehow. They did have four wheel drive, but I am still a little confused as to how it was passable at all.

The overlook was on top of a cliff that dropped down to the valley floor. To get down, we took the remnants of an old road that had been dug through the sandstone. The road had been abandoned long enough that water had carved a chasm along side the road and was undermining it at least fifty feet down. The road was rent by pot holes and fissures. The layers of rock in the cliff formed the usual variety of bizarre shapes. 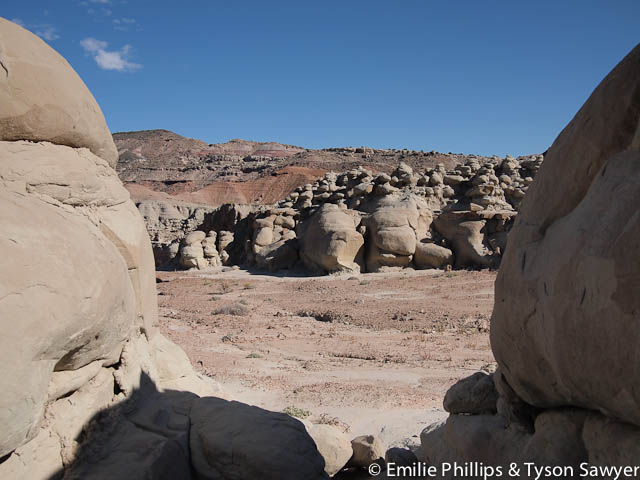 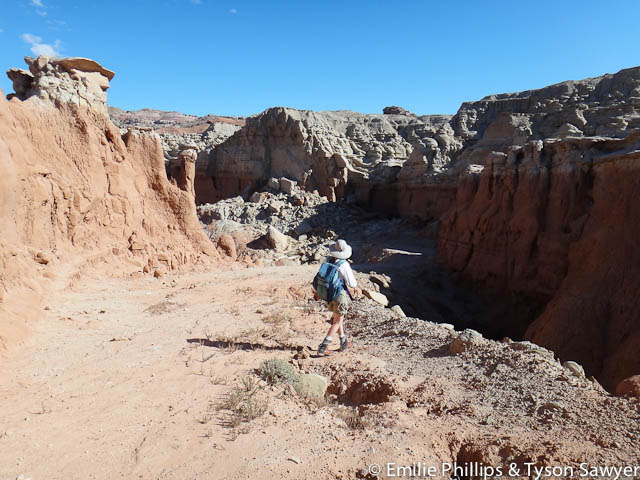 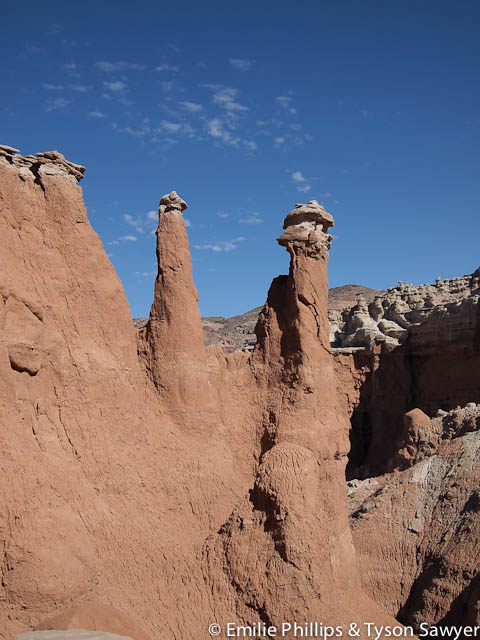 There was one set of footprints on the road down to the valley, but then the route proved to be as unpopular as the ranger had suggested. We approximately followed the old road track across the valley. It disappeared plenty and most of the time was only a vague hint. This area was drier than the others we hiked. There were fewer lizards, and we saw no other critters. There were no streams with trees lining their borders like there had been at Halls creek the first few days. The sparse desert scrub just rolled up and down off into the distance occasionally broken by rock features. 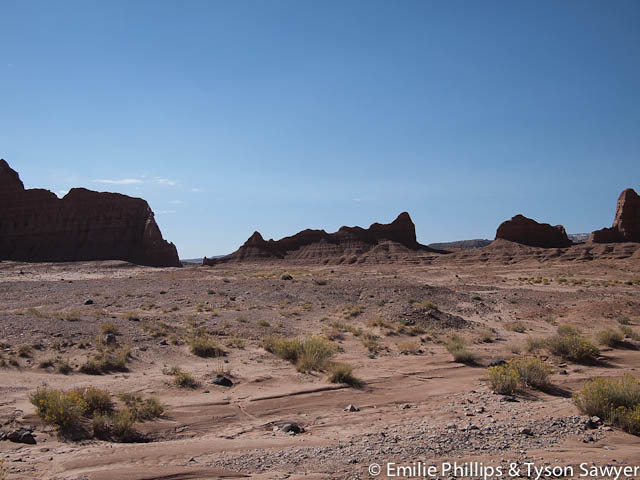 The first big rock feature was Jailhouse rock. We also found some water, or at least a liquid substance. 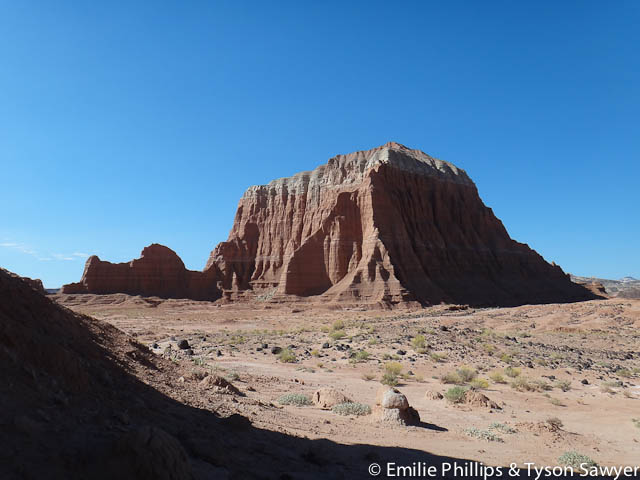 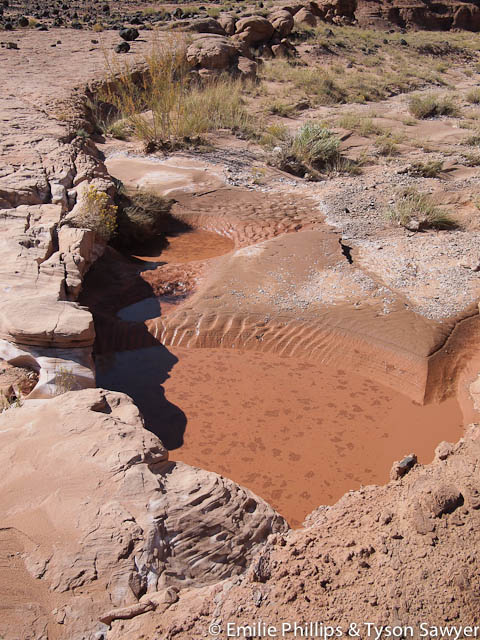 From there, we lost the road tracks for a bit, but had a more distinct hiking trail to follow. When we realized we were back on the old road track, we noticed a two-toed ungulate track. It looked kind of like a really large deer. It stayed on the road the entire time. Looking on the internet now, it might have been a solitary cow given that they graze cattle out there. 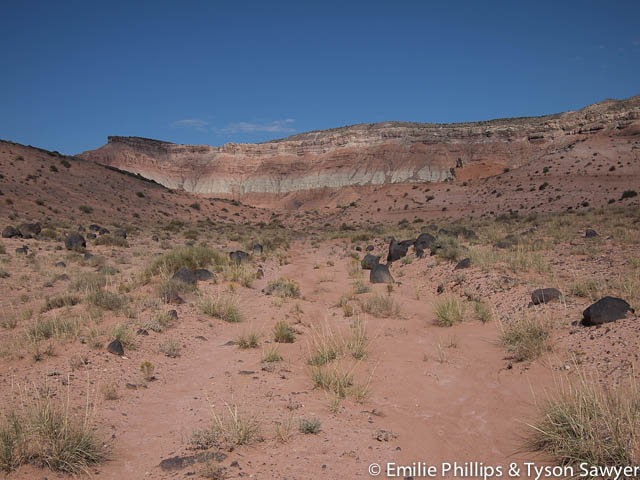 The views out in the valley were expansive. The valley was wide and open and you could see the water pocket fold on the far side running north and south for a long way. The next rock feature that we encountered we some basalt dikes. They varied in size and toughness. 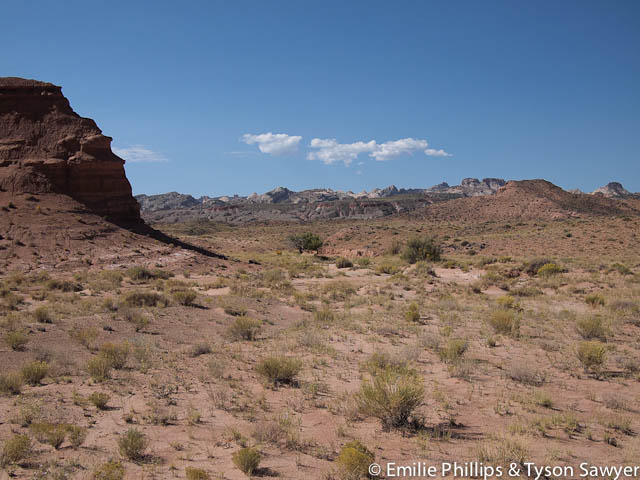 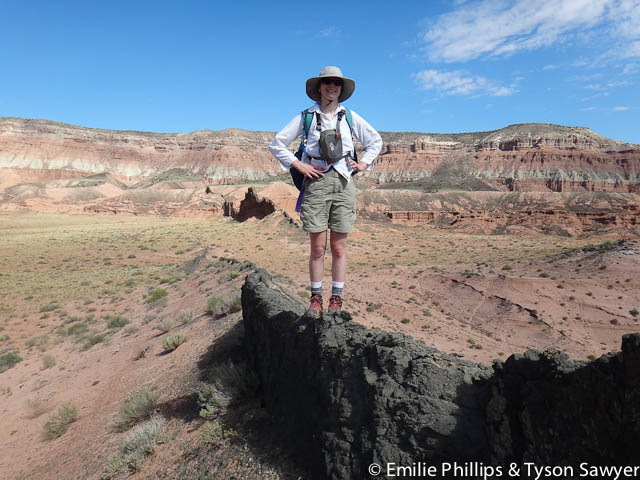 We stopped for lunch in the shade of one of the largest ones, and looked out on Temple Rock. We knew from there it was not a long walk back the car and then to the end of the vacation. Sitting in the shade, the desert was quite pleasant. So we sat there for a while looking out into the emptiness. The only sound was the wind blowing. Over the far mountains, cumulus clouds slowly built. 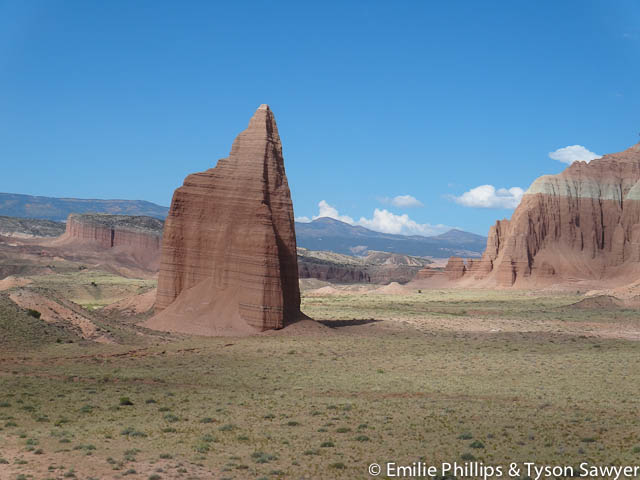 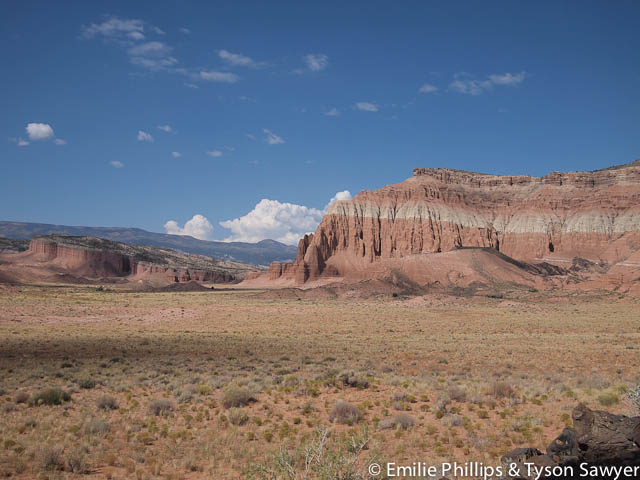 Eventually we headed back. We noticed that the ungulate followed the old road all the way back, even up almost to the overlook. That’s part of what makes me think it might have been something domesticated. While we had not seen anyone out on the hike, we saw a steady stream of people visiting the overlook while we hiked back. 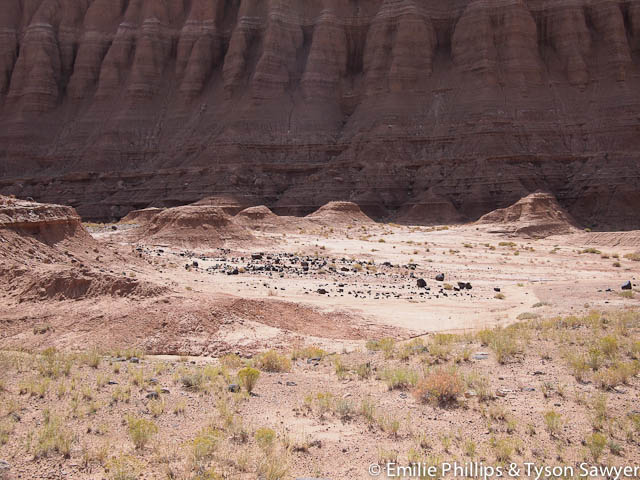 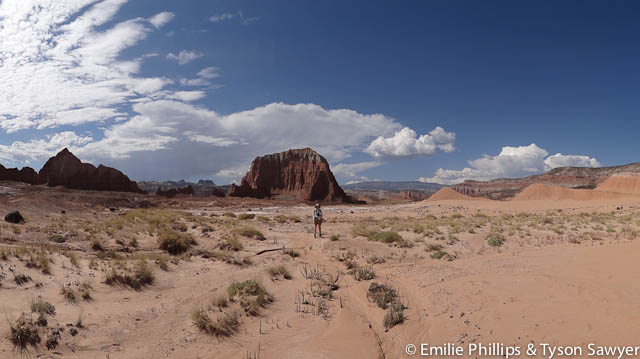 I fell asleep on the ride back. Luckily I never woke up to us stuck. We climbed back up into Fish Lake national forest and headed off to Salt Lake City. As the afternoon progressed, thunderstorms picked up and we got to see dust devils and lots of flying dust. 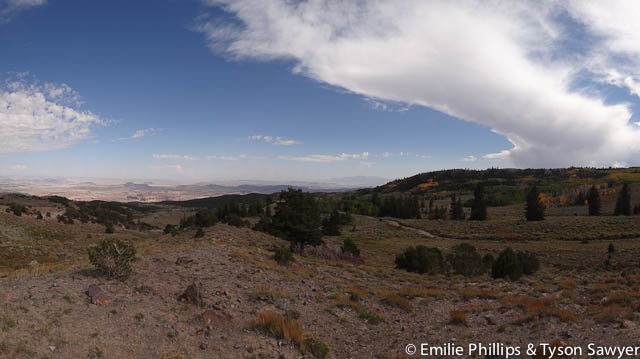