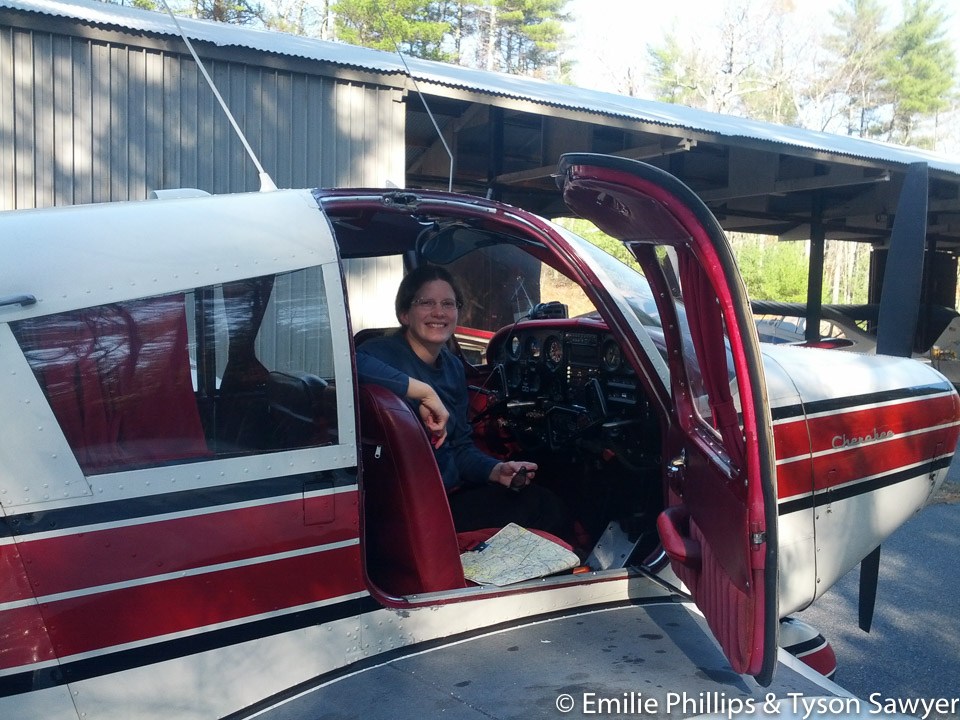 We failed to come up with a coherent plan for the labor day weekend. Part of the problem was the forecast for the remnants of hurricane Isaac which canceled our first two ideas. After a slow start Saturday, we finally decided that Tyson would work on his airplane, and I would head up to Franconia to try out gliding. By the time we established this plan, I estimated I would arrive in Franconia around 11 am which was late enough that I might not get a spot in a glider.

My recollection from the previous evening was that it was forecast to be sunny. When I did a quick look at the vertical temperature graphs (skew-T) and tried to remember how to interpret them, I estimated that the gliding would be good to 4000′ and clouds starting at 5000′. I did some quick preflight planning, the forecasts still generally looked good, but there were some low clouds hanging around. Since I was going on my own, I took the trusty Cherokee trainer. I also shortened my preplanning time by using the gps and route tracking software on my tablet. The airplane had exactly the gas I calculated I needed plus reserves. Since I was running late, I decided to gas up on the way back if it turned out I needed it.

Up in the air, I headed north. To conserve gas, I made sure to lean the engine and stick to my lower throttle setting despite my late start. Then I concentrated on watching the low clouds and my options. This is where I really appreciated being in the Cherokee. It flies itself well enough that I could double check the chart to make sure I was above all obstacles. I tracked the weather by tuning into various automated observing stations. From looking at the chart, I decided if the clouds did not break or lift by Laconia, that I would have to turn around and head home. The terrain starts rising towards the White Mountains at that point. Listening to the Laconia report, it sounded promising. Sure enough, the clouds started breaking up. They were still big poofy clouds, but sparse enough that I could head up through them. I did not make it above the tallest clouds, so I had to make several detours. The GPS was quite handy for that. Arriving at Franconia, the clouds were scattered, but still tall enough that I had to descend fairly steeply to get through the layer. As it turned out, the thermals had not picked up yet, so there were few gliders out and little traffic in the pattern which made for a simple landing. I have not flown the Cherokee in a while, so I misjudged the height slightly and plopped it on. But nobody noticed and the grass runway cushioned it, so no big deal.

I had two motivations for going up to Franconia. The first was to see if I liked gliding at all, the second was to see how the Franconia club compared to some of the other clubs around. I got a two for one deal on the second mission because the Boston Soaring Society was visiting, so I could talk with their members too. It took me a little bit to sort out which group of people was which, but I managed to get on the list for glider rides/instruction. At that point they said it would probably be a couple hour wait. That seemed reasonable. There was plenty to see and lunch to eat.

I started by chatting with the Boston folks. The Franconia folks were busy with rides and managing the Boston club, whereas the Boston members were lined up waiting for enough lift to be worth paying for a tow. They had brought a club tow plane, but mostly looked like they had personal gliders. The people seemed friendly enough. Their big claim to fame was that they have many more resources, being a bigger club, than Franconia. I also was proudly pointed out their various professors and notable academic figures.

After lunch I figured out enough of the operation to identify the Franconia bunch. Their main instructor (Ritz?) was too busy with other students for me to meet him. The downside of arriving as late as I did was that I did not fit on his queue. Another pilot, Stan, was doing most of the for pay glider rides. He is working on getting his instructor rating renewed. I was not that impressed from the few questions I asked him on the ground. The Franconia club has two two seater gliders, a Schweitzer 2-33 which is their primary trainer and a Grob Twin Astir which they primarily use for sight seeing rides.

The way the schedules and queues all worked out, I ended up going up in the Twin Astir with one of their less active instructors, Sean. Since I had never been soaring, I paid for a little longer intro flight which meant it would be a combination of a sight seeing and instructional flight. The instructor flew most of the tow until we were safely above and away from the mountains. Then I got to try. The tow portion was described as being essentially formation flight. When the glider was close to the right place, I could keep it there. But when I got too far to the side, I could not quite find the right inputs to get back aligned. Once we were up and soaring the instructor gave me a little bit of a tour and then it was my turn. I never did quite understand how to coordinate the rudders and the ailerons. One of the things that kept confusing me was that the slip/skid string would indicate that I needed to apply rudder one way, but what I saw out the cockpit looked to me like I was skidding the other way. I have to wonder if sitting in front of the cg vs at or behind in an airplane changes the perceived motion for uncoordinated turns. Talking with Tyson later, he said the other big difference between the glider and airplanes I have flown is a much higher roll moment of inertia due to the long wings. I did not have that longer time constant in my mental model.

Sean pointed out various possible thermals. Amazingly he was almost always right. I was not very good at staying in the thermals, so he took over a few times to regain elevation. Understanding where the thermals are and how to stay in them is something I expect comes with practice.

Well before we ran out of lift, my ride time expired, so we were forced to put out the spoilers to come down. Sean did most of the spoiler control. Since a glider has no extra power, the landing sequence follows a specific sequence of altitudes, positions and speeds. I executed some nice S-turns working to the initial point. I hit it dead on all parameters. Unfortunately, from there, Sean took the controls for the pattern and landing, so I did not get to try any of that.

Back on the ground, the field was practically vacant. Everyone with access to a glider was up in the air enjoying the lift. I spent a while resting and chatting with Sean and one of the other Franconia guys. Unlike the Boston folks, it seems like the Franconia members are a little rougher around the edge. They also are a much smaller group. Only 30 or so people with two or three single seat club gliders in addition to the tandem gliders. It sounds like they frequently run a little short on instructors, but they are hoping by adding the new instructor, that will improve. Sean thought I had done quite well for starting with the Twin Aster which is by far the harder of their two tandem gliders and rarely used for instruction. I just wish I could have tried more of the difficult parts such as landing, but I guess he was not quite comfortable pushing the limits there.

Once I was rested, I double checked my trip home and headed out. I had burned less fuel than planned so I had a decent reserve, though I was planning on watching the time in flight. The clouds from the morning appeared to have improved. And I called Jaffrey just to make sure everything was fine for landing there. The trip back was fairly uneventful. I kept an eye on the time and gas, but I stayed nicely on schedule. I had the gps running, but I am starting to know the line of mountains back from the Whites — Mt Cardigan and Newfound Lake, Mt Kearsarge, Mt Sunnapee and Lake Sunapee though in that case, the lake is easier to spot, and finally and most prominent, Monadnock. Just a bit north of Jaffrey I entered a small rain storm and it followed me to the airport. Between the rain and getting a little tired and cranky, I really tried to concentrate on my landing. It came out OK. The one thing I forgot was to loosen the throttle control after having it tightened down for cruise. That meant I left power on for a little long, but I noticed and fixed it.

I needed a rest and dinner. Since Tyson was over hanging out with his parents, both were easily accomplished. By the time I headed home with a fueled airplane, I had recovered enough to do a bunch of air work practice on the way, and two nice landings at Brookline.

(Update 2022: I joined the Boston soaring club and started working on my rating.)