For our first hike from the Many Glacier campsite, we chose Grinnell Glacier. Several people had recommended it, and the weather was forecast to be worse the rest of the week. This would be another long hike – 12 miles. Similar to the Two Medicine campsite, the first two lakes along the trail had boat tours. Tyson was really hoping to catch the boat on the second lake to shorten our hike, unfortunately it turned out you had to start the boat tour at the hotel which was well out of our way. I actually preferred hiking around the lake because it was really pretty. Tyson, on the other hand was put out because his feet hurt from prior days hikes. The last boat back was at 5pm, so odds were we would miss it.

Even with our early start, there were other people on the trail, and a number of reports of someone sighting a bear. Mom spotted a moose way down in the swamp. The trail climbed up the side of the rocky mountain. In places it had been blasted out of the rocks, and in others it was held up by a masonry wall. There were plenty of streams running across the trail, waterfalls and spray plunging from above, lots of flowers, and wonderful views.

At one point an unaccompanied teenager caught up with us and tagged along. We recognized him as belonging with a family we had passed previously. It was a little bit awkward because we had no idea if his family knew where he was, he was clearly less prepared than us, and we weren’t quite sure how long he planned to keep up with us. Luckily he turned around at the one major switch back. Some whiles later, we found some people wandering around in the bushes because they had missed the switchback and gotten lost.

Unfortunately, the next thing we found was a sign hung across the trail saying the snow hazard ahead required crampons and ice axes. We ducked under the rope to check out the actual conditions and found the sign was correct. The first part of the snowfield was level but undermined by streams. Then it steepened and we could just make out the trail climbing across the slope over occasional rocks. Microspikes would not get us across that. My Dad was sorely disappointed he left the ice axes at home. So, we turned around. The views from the snowfield were lovely.

Back on the trail we found a scarce dry spot with rocks for lunch. Not long after, some big horn sheep walked up the trail. They climbed up behind us, but the lead ram came over to sniff us. When we did not look dangerous he approached and licked my jacket. That was far too close for my comfort and I really hoped I didn’t do anything to startle him into ramming or kicking me. Then he headed over towards Isaac and our lunch food. Isaac was excitedly exclaiming “Puppy! Puppy!” which did not faze the ram at all. We decided that it had probably been fed and we just needed to pack up our lunch and leave.

Hiking back down the trail was just as pretty as up. Isaac decided to hike for almost a half mile. He was practically falling over when he acceded to being put in the carrier. Since we had turned around early, we had plenty of time to make it to the boat ride. I wanted to use the time to hike up to Grinnell lake, but Tyson’s feet were killing him, so instead we just splashed around in the water. Tyson appreciated the ice cold water on his feet. While we were waiting, a few people spotted a tan colored black bear way up on the mountain. We saw it again from closer on the boat ride. 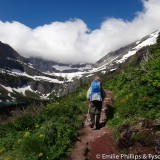