We stuffed a bunch things into this past weekend – a big nap for everyone but me, dinner out and gym rock climbing with Jason and Dianne, chopping and stacking firewood, and welding on the airplane.

I managed two 5.9’s at the gym despite not having climbed at all in a year. I also found two sets of dirty socks in my climbing shoes despite not having climbed for a year… Tyson was cautious about his knee so only did two easy climbs. And Isaac didn’t understand the concept of holding on with his hands. He would walk his feet up the wall while an adult held his torso until he was upside down. 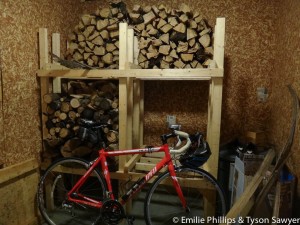 Wood room not quite half full

We cut and split a section of oak tree that had broken a few years ago, but only fell down this fall. That combined with the remnants of last years wood filled the wood room a little under half way. There is still more of that oak tree that we had cut when it first broke to get it out of the road. Those pieces are triple length, but might be enough to fill the wood room. And then Russ left some wood when he moved south that’s available. We should probably stash some of that for next winter. 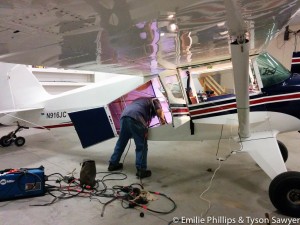 Lastly, Tyson worked with the welder to make progress on our rear seat conversion in the Bearhawk. They added new attachment points so we can attach a single wide seat in the back and shoulder seatbelts. Next the welder has to cut the existing seat in half and reenforce it. Then we have to get it re-apolstered.