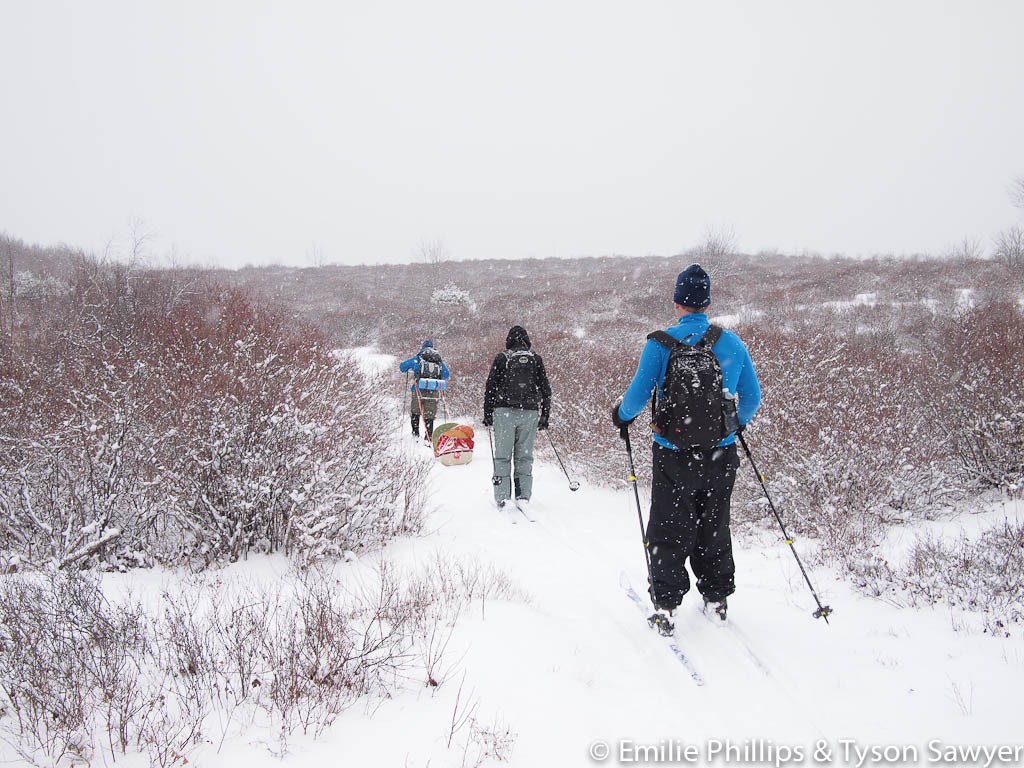 Tyson and I led an AMC trip to the blueberry fields on Hubbard Hill. Two weeks prior we had skied there and found sufficient snow for the well maintained road. Then the weekend prior it rained, melting a lot of the snow near our house and turning everything from our house to the Lakes Region to ice. I decided not to cancel the trip. Andorra forest is higher elevation, so maybe it melted less. And the forecast was for fresh snow during the ski, so if nothing else, the return trip would be pleasant.

The forecast snow turned up a little earlier than anticipated which turned out to be critical. Unfortunately, the snowy roads forced one of my participants to cancel. The parking lot was treacherous glare ice under a few inches of fesh snow. Once we put our skis on it was OK,  but whenever people removed their skis they had to be careful. The fresh powdery snow was just enough to be fun, but no so much as to make breaking trail a chore.

The snow fell so thickly we could not even see Pitcher Mountain from the blueberry fields. Tyson and I pulled out our yellow shelter for lunch to minimize Isaac’s complaints about cold hands or mittens. I felt a little bad not keeping track of my participants status during a long stop, but we did know two of the three were quite competent on their own.

After lunch it warmed up and the snow started sticking, particularly to Mike’s skis. His bases were in dire need of glide wax. After stopping repeatedly to scrape, we decided to riffle through everyone’s pack for glide wax and slather it on Mike’s skis. Then we were all able to enjoy the trip back. All except maybe Tyson. Isaac demanded to sit on top of the pulk and then drag his feet in the snow. He fell out once and Tyson partly ran him over. The moral of the story is Isaac isn’t allowed to sit on the pulk unless he has his skis on, and someone needs to be constantly monitoring him. 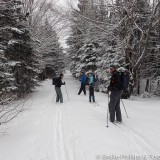 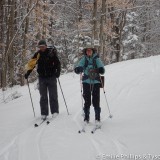 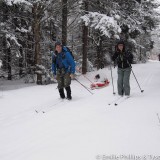 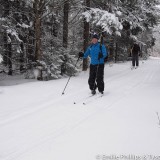 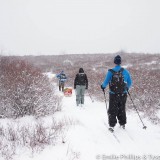 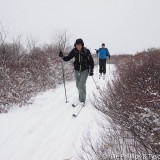 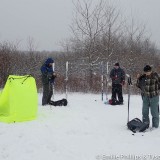 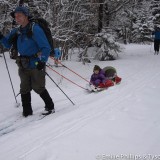