We have not been receiving our normal amount of heat in our sand and slab heat masses. There seems to be several factors.

Solar gain and outside temperatures this year

Looking back at last year’s solar history isn’t entirely conclusive because the neighbor’s weather station was offline a bunch in January and February. But last year does not appear to be significantly sunnier than this year. One definite difference is that in February last year, the outside temperature warmed up. This year has stayed cold 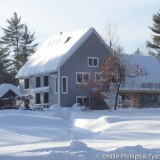 Another factor limiting heat in the slab was the major snow storms. The first storm was January 26th, then another a week later, and another a week after that, with several smaller events in between. We ended up with almost three feet of snow in the yard. I think the snow avalanched off the panels the first snow storm. The second storm, the snow only partly slid off. And the third storm did not slide at all as seen in the February 15th photo above.

Comparing the heat inside the house and in our storage masses between this year and last year, last year we received consistent heat into the sand and slab almost every day. The solar panels heat hot water for radiant piping in the sand and slab. This year, the last significant solar heat in the slab was February 2nd. In the graphs, solar heat shows as a sharp half day rise. The more gradual up and down trends are the slab adjusting to the inside air temperature. To compensate this year, we ran the wood stove a lot to warm the house up.

This year inside temperatures

After the 15th, there were some sunny days. The top third of the panels melted but no more, which is why you see little rises in the slab temperature. Clearly we needed to figure out how to clear off the panels. This Sunday was the time to do it. The forecast was for above freezing temperatures and bright sun. So if we could get the roof and panels mostly cleared, the weather should do the rest. I called around to several stores, but none had roof rakes in stock. Then I started calling family, friends, and neighbors. The weekend prior, when Tyson helped clear the communal T-hangar, they had great success with a box scoop thing, so we borrowed one of those first. It kind of worked, but it wasn’t nearly long enough, even when standing on an 8 foot ladder. And then we broke the pole.

It was mid afternoon by then and we were running out of sun to help melt the snow, so we decided on a two pronged approach. My parents went off to buy a 12 foot tall ladder, and Tyson called more friends until he found another pole we could borrow for the box scoop, and a roof rake. That combination ended up working well. Tyson attached the pole to the end of the roof rake making it long enough to reach all the way up to the panels. We cleared off all the snow. Underneath the snow, we discovered significant ice dams at the bottom of the panels. Our roof itself is cold, so it doesn’t make dams, but the panels have slowly melted in the sun. The dams would likely prevent future snow from sliding off the panels. Tyson figured out he could pop the ice dam off by removing the rake and just using all the poles as a poking device.

The reward for all our hard work was yesterday, a mostly sunny day, the slab temperature rose by 6F!

I still can’t completely explain the temperature difference in the heat masses last year to this year. If you look back up at last year’s inside graph, you’ll see that both the slab and the sand are oscillating daily, whereas this year only the slab is oscillating. What that means is last year we had the solar fluid valves configured to heat both the slab and sand whereas this year we are only heating the slab. Our policy for turning on the sand is whenever the slab has generally been warm enough for a week or so, we turn on the sand to store the excess heat there. So, that means, last year we had excess heat even mid January, whereas this year in January, before any of the big storms, we were already too cold. I don’t know why that was.