Wednesday we continued our flight from my parents down to Russ and Renea’s in Florida.

We hurried out in the morning so my parents would be on time to their trail maintenance hike and we could arrive in Florida before afternoon thunderstorms. The last thing we needed to plan was lunch. I tried skyvector, airnav, google, etc and for the life of me could only find one airport with food near where we wanted to stop for fuel. I had to give up looking because we ran out of time. 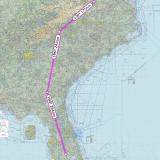 We planned our route via KFQD (Rutherford County) both to avoid the Charlotte NC airspace and as a possible gas stop. Departing Lynchburg, we got stuck waiting for a traffic jam of student pilots. When I was cleared to takeoff, I almost requested a flight of two so Tyson would not have to wait longer, but I did not know if he was ready.

We had headwinds again, though not as strong as Tuesday. As I was approaching the turn at KFQD, my calculations again said I would not make it to lunch at KDQH using only the “usable” portions of my fuel tanks and with 30 minutes of reserve. So I decided I should probably stop for gas. At one hour, I switched fuel tanks. Nominally, I now had just over a half hour of “usable” remaining in my right tank, and 13 gallons usable in the left tank. Additionally, each tank also has about 2 gallons that can’t be counted on if the air is bumpy.

Thinking about my total fuel, I decided to switch strategies. Rather than being excessively conservative as I had been the previous day, I decided to burn my left fuel tank until it went dry. If the air was smooth enough, that would allow use of the extra 2 gallons. At that point, I would have my half hour reserve in my right tank, and there were plenty of airports with gas, so I could just land. We rebuilt the left fuel tank a few years back, so I was uncertain if the two gallons could be used, and whether the fuel gauge was accurate. This would answer both.

After an hour, the left gauge said 1/2 full, as expected. I forgot to watch the gauge for a while. At almost two hours, the gauge said almost empty. In my head, I had mapped out which airport to land at depending on where the gas tank ran dry. At 15 minutes or less from my destination, KDQH, I would continue there. When I was about 17 minutes out, I started getting antsy. At 12 minutes out, or just a little over 2 hours of burn time the left tank ran dry. So, Tyson’s estimate that the RV-4 can fly 3 hours plus reserve if you maintain 140kts and lean it properly seems to be correct, as long as you burn one fuel tank completely dry.

Arrived at Douglas GA, I got lost several times trying to find fuel. Tyson was an hour behind me. Initially I thought I might try to push on immediately, but I would first have to borrow the courtesy car to get to the restaurant. And after studying weather, it really didn’t look like thunderstorms in Florida were a concern. The airport manager helped out with the finicky self serve pump, and recounted the airport history. It was the last remaining WWII training facility, or something like that.

Tyson and Isaac arrived and we went off for lunch. I had yummy catfish. Both Tyson and Isaac hadn’t drunk enough in the plane, so we stuffed Isaac with the first of many lemonades.

That morning, we had planned one more stop at Zephyr Hills, FL to buy really cheap gas prior to Lakeland. However, after flying 4.5 hours into headwinds already, Tyson wanted to finish the trip. So he filled up and we headed straight to Placid Lakes.

Florida was flat and wet, a change from the Appalachians we had been following. We chatted on the radio some until I flew too far ahead. After that many hours in the air, my landing was graceless. When I arrived at Placid Lakes, I found some folks working on rebuilding a Piper Colt. They helped park my airplane in the communal hangar. Eventually Renea arrived with the car, and Tyson flew in at around the same time.

We enjoyed dinner with Renea and Isaac had fun playing with the kids. Then we collapsed.