Today’s forecast called for possible thunderstorms and we were planning a long hike for Thursday, so a short easy hike was planned.  The guide book listed the mileage at about 4.5 miles round trip and elevation gain as a breathtaking 40 ft.  Well, if the elevation gain wasn’t breathtaking, at least the views of the mountains were.  Isaac was eager to hike.

The route went along the side of String Lake (a very long narrow lake that was really a very shallow and wide river) and then up the side of Leigh Lake.  With Isaac hiking on his own, the pace was slow and the load was light.  We stopped for lunch at a beach on the side of Leigh Lake a short distance before our turn-around point.  We sat on stones and logs, immersed in the views of the mountains.  Snow fields and glaciers could be seen up on the higher peaks.  After lunch Isaac and Emilie enjoyed throwing and skipping stones in the water.

Isaac ended up hiking all the way to the turn-around a (very) short distance of the return trip before asking to be carried in his carry pack.  …and he specifically requested (demanded?) that Grandma be his horse.  With Grandma as his carrier, he was soon asleep for our reasonably quick trip back to the car.

The weather ended up being a fantastic mix of clouds, sun and just a very few rain drops.  However, shortly after we left the parking lot, we looked back and saw thunderstorms coming over the mountains.  Our easy and early return proved to be well timed. 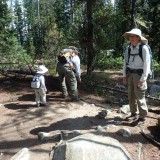 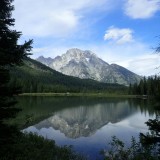 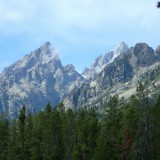 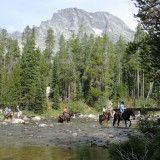 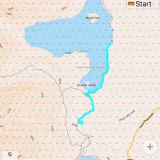