Skiing the thermals of the Old Faithful area

Our first day at the Old Faithful lodge in Yellowstone, we toured the geysers and thermals along the banks of the Firehole river.

We started with the obligatory Old Faithful eruption. In the winter, the geysers put out a great plume of steam that hides much of the water. You can still hear the water gushing and roaring. The billow of steam rises a hundred feet high. This morning, fog hid the steam, but later we saw some good Old Faithful eruptions.

From there, we followed the boardwalks to the other side of the river. Isaac got out of the pulk to ski on his own. That made it easier to maneuver the pulk.

I love the colors and textures produced by the geothermal activity: the round balls in some hot springs, the stair-step mineral deposits on others, and the intricate details of algae. Then there is the joy and surprise of watching an unpredictable geyser erupt. Or trying to understand why the water level in a thermal breathes up and down.

Tyson wasn’t feeling great, so he took the short route back to the lodge from Castle Geyser. Isaac ran out of go at about the same time, so we put him in the pulk where he happily fell asleep.

My parents, Isaac, and I continued onto the Biscuit Basin trail past Grotto Geyser and Morning Glory pool. Unfortunately, the pool’s glory has been dimmed by people throwing in coins and trash. They change the chemistry and harm the bacteria that make the beautiful colors. There were other unnamed steaming bogs along the trail. We saw fewer people on this section of trail than on the main boardwalks.

We crossed the Firehole river on the highway. In the winter, the highway is completely snowed over. Only the occasional snow coach or snowmobile pass by. Then we followed the return loop of the Biscuit Basin trail back to Daisy Geyser. Along this section, we saw no thermal activity. Instead, clusters of 20-year old pines had regrown here and there after the last forest fire.

We rested at Daisy Geyser and watched it erupt. With all the steam, it was a little hard to see which of the cones erupted. From there back to the lodge, we skied on a wide groomed road. Isaac skied on his own again. Castle Geyser was dormant when we passed it. I think the rangers said it was in a multi-year steam only phase.

Tyson rejoined us for dinner, though he didn’t eat any. Then we took advantage of the free ice skates and festive ice skating rink.

Castle Geyser in the distance -- Comments (0)

Heart Spring with Lion Group in the background -- Comments (0) 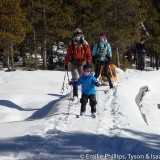 Old Faithful in the distance -- Comments (0)