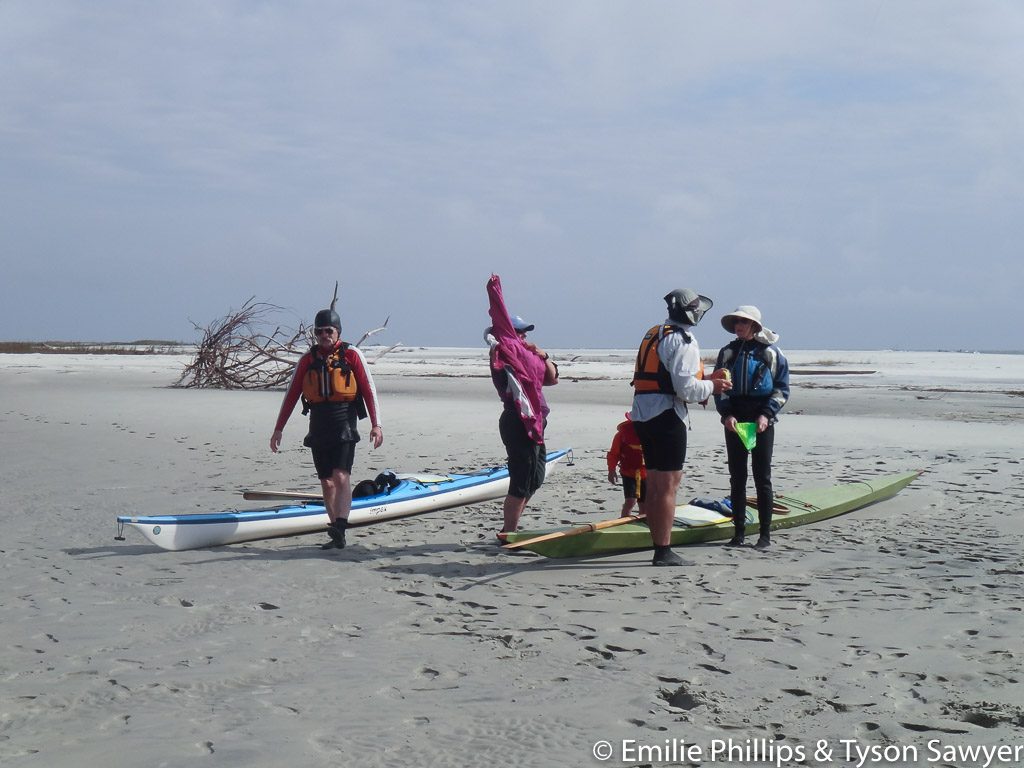 On our third day, Tyson’s cousin Tara joined us and we discovered a circumnavigation.

Tyson’s extended family has an active group on facebook. One of his distant cousins, Tara, posts about her kayaking trips and kayak camping trips. She lives a few hours away in Charleston, so Tyson invited her down to come paddle with us.

After two days of paddling the same sandbars at the mouth of Tybee Creek, I wanted something different. Our options were to head upstream into the marsh, or out to sea. Out to sea wasn’t appropriate for the sit on top, and we didn’t know if it would be appropriate for Tara. So we opted for up the marsh. My mother and I starred at the charts and google satellite the evening before, but we could see no good route. There were loops, but they all either crossed open ocean, or were too long for Tyson in the sit on top to paddle. Tyson studied the charts in the morning with no more success. Without any better idea, we decided to try the next side creek upstream from Buck Hammond Creek — Jack Cut.

We put in at our regular spot at the end of Inlet Avenue. I was getting thoroughly sick of the sand sticking to everything. Once in the boats, we crossed Tybee Creek at high tide. The grasses on the far side were full of water. I found it mesmerizing to watch the waves slide through the grass, rolling off into the distance. Since it was high tide, we contemplated several smaller tributaries before we identified Jack’s Cut. We found it using the GPSs. At the first major junction, Tyson declared that the main creek went right. However, he said, if we turned left, there was a chance we could paddle through to the other side of the marsh. I was delighted we might make a through trip, so I immediately turned left. In retrospect, I should have looked at the charts and GPS’s more because left was actually a route I had discarded the night before and for good reasons.

We turned this way and that way, meandering our way up the marsh stream. Isaac and I played peek-a-boo around the meanders. There was a slight ebb current indicating we were paddling upstream, but not much. As the creek narrowed, my Dad announced that his GPS indicated we would shortly break out into wider water. From there we needed to turn right to reach Little Tybee Slough. As soon as we entered the wider water, a strong ebbing tide and north-easterly wind swept us away. We had made it through the marsh without getting stuck in mud or lost.

None of our charts or GPS accurately depicted Little Tybee Slough’s mouth. To be fair, the charts labeled it “Changeable Area”. The slough has eroded straight through Myrtle Island and dumped us directly out to sea.

It was lunch time, and a good place to stop. The submerged remnants of Myrtle Island created nice waves for surf play with a protected area behind them. Tara pulled up on shore. My parents played in the most protected of the waves. And Tyson, Isaac, and I paddled out farther to ride a few bigger waves before coming back in for lunch. After lunch, Tyson and Tara tried the sit-on-top in the unprotected waves. Isaac and I flew the kite and swam in the water behind the island. There was quite a swift current in the protected water, so it was a great place to teach Isaac to swim towards shore when being swept away by current.

After lunch, we had to figure out how to return to our put-in. The obvious answer was to paddle along the exposed front side of Myrtle Island and then back up Tybee Creek. This was the whole reason I had discarded the route the night before. I wasn’t sure either Tyson or Tara would be up for a mile of exposed waves. They both declared they were game. So we paddled out. Tyson wanted to lead the group, but there was no way he could effectively manage group dynamics from the slowest, least sea worthy boat. As a result, I split my time between attempting to keep the group together and helping Tyson with impatient requests from Isaac. I spent the entire paddle back Myrtle Island worrying about the group. The first stretch we weaved in and out of modest (~1ft) breaking waves. On the second stretch, a sandbar out in the distance blocked almost all the waves. Instead we had to fight a head on current. It was slow going.

Eventually, we turned north around the boneyard at the end of Myrtle Island and pulled up onto the beach for a rest. The current was still ebbing fast out of Tybee Creek. We decided to dally waiting for it to slow. So we paddled over to the sandbars in the estuary and letting Isaac paddle “grandma’s boat” in one of the pools of water. We finished the day paddling up the familiar Tybee Creek.

All told, a short day for Tara, but quite a bit longer than I thought Tyson and Isaac could paddle. 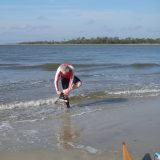 John washing the sand off his feet. 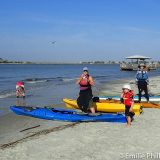 Everyone at the put in 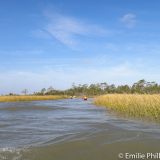 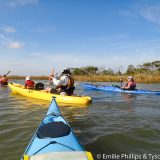 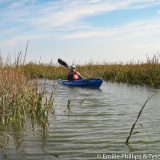 The channel became narrow and winding. 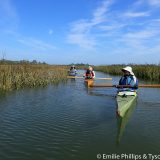 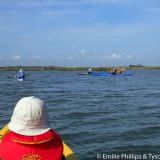 Through to Little Tybee Slough 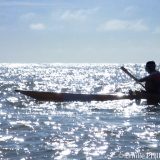 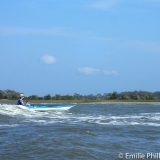 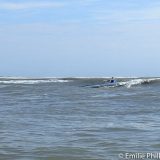 Tyson and Isaac getting some surf in the barge. 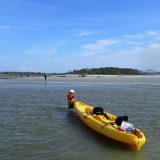 Isaac pulling his kayak up to shore. 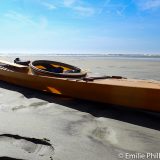 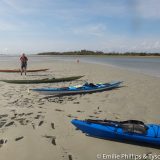 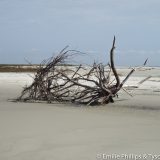 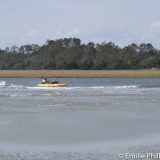 Tyson and Tara returning from playing in the waves. 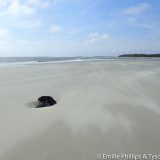 Preparing to paddle the ocean side of Myrtle Island 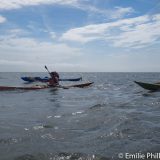 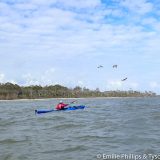 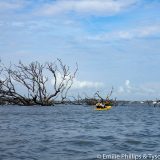 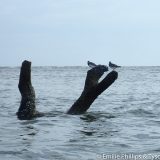 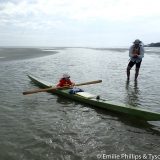 Paddling up Tybee Creek against the ebb.