The Gulf of Slides(GoS) is a well known area for skiing on Mt Washington, 2nd only to Tuckerman Ravine. It lies just to the south of Tuckerman Ravine, separated by Boott Spur. This year I volunteered to lead a trip to the GoS for the NH Chapter of the AMC. With me was a “leader in training” who needed his final “mentored” trip to become a full leader.

The weather and snow conditions during the week leading up to the trip had been ambiguous. The forecasts were for sun, but possibly wind and cold. Additionally, we were both blessed and cursed with some snow shortly before the trip. A bunch of fresh, windblown snow slab on top of an icy surface can be a recipe for skier triggered avalanches. Have you asked yourself where the Gulf of Slides gets its name? The morning avalanche advisory for Tuckerman Ravine indicated a couple of runs that had “low” avalanche risk. The rest of Tuckerman Ravine was rated at “Moderate”. There are no advisories for the GoS. If you go there, you must use any and all available information and observations to assess risk. The good news was that temperatures would climb above freezing and there would be plenty of sun to warm things up. Additionally, Mt. Washington would shield us from the northwest wind. We set a plan to go up the GoS Ski Trail, but would not expect to ski the steeper slides.

At 8:35, we were on our way up. Temperatures had been in the teens when we arrived at Pinkham Notch. Once on the trail, we all soon realized that we had under estimated how quickly the combination of still air and bright sun would cause temperatures to rise. There were a couple of stops to remove layers of clothing. The fresh snow on the GoS Ski Trail promised a nice ride down for the end of our trip. As we climbed higher, each time the trees opened up we marveled at the cloudless blue sky, warm weather and fantastic views. The only condensation we could find in the sky was the occasional contrail from a passing airliner.

We arrived at the main slide at the end of the GoS Ski Trail 2.5 hours later. We found a few people skiing it, but still felt that the narrow chute with edges that are hard to escape and a narrow funnel point at the bottom, combined with the mostly moderate rating in Tuckerman Ravine, was not worth the risk.

Then I looked further to the south snow fields… Hmmm… It had none of the terrain entrapment features of the main slide. It also had a somewhat moderated angle and a nice looking spot we could ski that was a bit of a ridge, making it less likely to contain a deep layer of wind slab that might slide. There was one area we would avoid, but the south snow fields passed everyone’s assessment for risk.

I led the way through the well tracked but very narrow bushwhack to the south snow fields. I was last there in 2010. That year the lower part of the south snowfields was an impenetrable thicket of evergreens. A lot of snow would have been needed to cover them. There may have been a major avalanche in recent years that cleared out the trees. This year we found wide open, beautiful skiing.

We picked a skinning route up the left/south side that was lower angle. During the hike up I noted that the wind slab was soft, warm and generally thin. In some places the underlying consolidated snow was exposed and softened by the sun. This looked like low risk and nice skiing. After topping out, we traversed to the north to be above the ridge we planned to descend. There we shed our loads and sat down to enjoy the sun, views and lunch. It was 12:30.

Clearly we were enjoying ourselves, because the recorded track says that it was 1:20 by the time we were ready to head down. I offered an easier route for those that looked less confident about the sustained 35 degree slope in front of us, but all decided that they were up for the challenge and boldly started carving turns. …and such sweet turns they were!

When we had started our final push up to the ridge, there had been discussion of a possible second lap. When we reached the floor, the topic of a second lap came up again. After experiencing the first run, everyone was in! One split boarder dropped out part way up because they were having difficulty with skinning the steep slope, but everyone else made it to the top.

By this time the wind had swung around to be more southerly resulting in less protection from the ridge. A high thin layer of clouds dimmed the sun a bit. The combination made the snow a bit more “stiff” for our second pass, but still nice skiing.

Then things took a turn for the worse. One of our group took what appeared to be a minor, low speed fall while descending the steep pitch from the top of the ridge. Unfortunately, she twisted funny and one of her skis didn’t release. The result was an injured knee. We poked at it a little and she concluded that she would ski back. We reduced the load in her pack and encouraged her to ski slowly and carefully.

We made decent progress down the GoS Ski Trail until about the half way point. Here she made a “hockey stop” and fell over on her side. No big deal. However, the pain in her knee prevented her from getting up, even with some assistance. We removed her skis and sat her down on my pack. A bit more inspection was done which left me concerned that she might have a minor fracture. An ACE bandage and a couple of ibuprofen were applied to control swelling, reduce pain and offer the knee a small amount of support. When asked how she wanted to proceed, she said that she preferred to stay on her skis vs other options. This was probably a reasonable decision, even in hindsight.

We attempted to proceed, but she kept having trouble with the knee. At this point, I was uncertain how well she would do at getting down the remainder of the trail. I sent her boyfriend down to the AMC Pinkham Lodge to request a sled to assist in the extraction.

Due to some other logistics, that left myself, the “victim” and the other trip leader. I’m not sure if it was time for the ibuprofen to kick in, the lack of distracting audience, or the very controlled manner in which we directed her, but soon we were making slow but steady progress down the trail. To ensure that she didn’t ski with any speed and kept the strain on her knee to a minimum, we had her slowly side slip down with one of us on each side of her; one above and one below. This allowed us to set the pace and be ready to help any time she needed it.

It was decidedly slow, but progress was steady. My co-leader did an amazing job of engaging her in random conversation to help pass the time and keep her relaxed. A little after 6:00 PM, about 3 hours after she fell and most of 2 hours after wrapping the knee, we descended the last steep pitch of the GoS Ski Trail about 0.6 miles from the bottom. There we encountered a small team from the AMC Pinkham Lodge with a sled. By this time, she was visibly tired from the pain and stress of the descent. While previously she had been very motivated to stay on her skis and not make a big deal of her injury, now she readily accepted a ride in the sled. Half an hour later we reached the parking lot.

Having someone get injured is quite a blemish on an otherwise outstanding day of blue skies, warm weather and soft snow. The young lady and her boyfriend reported that other than the obvious, they had both had a great day. The next morning I received an email indicating that there were no fractures and that her knee should heal in 4-6 weeks. …just in time for their trip to Iceland. 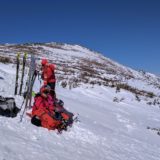