It was cold enough on Mt Washington to instantly turn boiling water to snow; Tyson and Brian postponed the traditional AMC New Years Eve ski down the Sherburne trail. Instead, we relocated to Windblown with our heavy equipment. We traded the epic trek of Mt Washington for hot chocolate and chowder in the lodge and Adirondak shelters on the trails.

Most of Windblown is a rolling touring center, but the southern edge backs onto Barrett Mountain. There, they cut several glades and one open slope straight down the hill.

The night before, Tyson made a tow rope and bungee like the family we saw at Cardigan. He clipped this to himself and Isaac. Isaac, whose skis were only kick waxed for the tour, slalomed back and forth behind Tyson like a water skier behind a boat. At the bottom of the open slope, we switched to skins, and Isaac had to work again.

We saw two skiers on lightweight telemark gear — leather boots, cable binding, and narrow shaped skis. No one else in plastic boots and skins, and definitely no one on AT gear like Brian. The trails were less steep than the Sherburne, but they made up for it by being narrow. Brian commented to Tyson it would be a good place for a mini backcountry clinic.

Brian departed after lunch, leaving my parents, Tyson and I. We headed for the glades. We skinned up Barrett’s Backbone easily compared to the side-step and herringbone tracks left by cross country skiers. At the top, the clouds and blowing snow abated enough to see through the glades to farms in New Ipswich below. We decided not to ski down the glades. They needed more snow, some pruning, or probably both. Instead, we skied down East Side Swoop which had fun steep winding sections.

Starting out for the teaching fields -- Comments (0)

Skinning up the open slope -- Comments (0)

Tyson taking his skins off at the top -- Comments (0)

Polling on the glide out -- Comments (0)

John on the last run down to the lodge -- Comments (0)

Isaac catching up to Tyson on tow -- Comments (0) 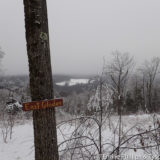