Catto composite propeller on my RV-4: installation and first flight

I upgraded my RV-4 to a Catto propeller for better performance, quieter cruise, and more ground clearance. My old propeller was a Sensenich.

The Catto propeller airfoil is more advanced than the Sensenich. In my hand, it’s noticeably thiner. Metal propellers have more structural constraints than composite ones. The net result is the plane takes off better and cruises about the same.

Catto offers propellers with various pitches. EXPLAIN LINK I opted for takeoff performance because Tyson has noted that I can land shorter than I can take off. A constant speed propeller would be even better for my off-airport adventures, but my engine doesn’t support variable pitch propellers.

Hartzell has a FAQ page explaining more of the differences between two and three blades.

The composite Catto propeller is 20 lb lighter than my old Sensenich. Great! Weight off the airplane means a more responsive airplane or more allowance for cargo.

Then we ran the numbers. Planes have to be balanced fore-aft. By taking all that weight off the nose, my plane would be terribly out of balance. I wouldn’t be able to carry any luggage or a passenger over 180lbs.

So Tyson found a 20 lb tungsten crush plate (metal ring) to bolt on the front of the propeller. We weighed the original propeller assembly vs the new propeller. Both weighed 46.3 lbs.

Earlier, I mentioned the lighter propeller has less rotational inertia. Why does propeller inertia matter?

With less inertia, the propeller can speed up or slow down quicker in response to power changes. On the bad side, the propeller’s momentum won’t keep it spinning if the engine stumbles.

We considered a ground adjustable propeller from Sensenich, but it was almost as light as the Catto and Tyson couldn’t figure out how to add more weight on the nose to compensate.

The Whirlwind ground adjustable had the same issue of being too light without any obvious way to compensate.

To install the new propeller, we needed a few other parts.

We ordered everything through Catto. They coordinated with Saber to provide the crush plate, extension, and bolts. Catto painted the new spinner to match a sample we sent them. The propeller arrived FedEx freight, which was a little annoying. But the truck driver had his private pilot’s license and was all excited to get to deliver a propeller. 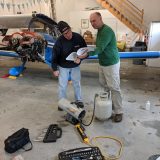 The Catto manual was helpful

The great thing about experimental airplanes, is we can do our own maintenance, including installing a propeller. One of our neighbors, Mike, with more experience than us, came over to help. The Catto manuals were easy to read. 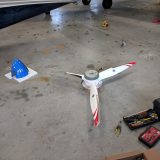 Test assembly on the ground

First Tyson and Mike attached the fly wheel and the 4 inch extension with one set of bolts. We put some grease between the engine flange and the fly wheel to keep the different metals from corroding each other. Once the bolts were tightened, they secured the bolts together in pairs with safety wire. This keeps the bolts from backing out. Tyson rejected their first few attempts, cut the wire off and tried again until they were happy. It’s pretty easy to see if the safety wire is done right. 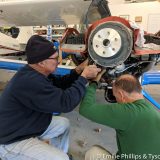 Then they realigned the starter motor with the fly wheel teeth and tightened it down.

Next, we mounted the bulkhead, propeller, 20lb crush plate, and the regular crush plate on the long bolts. So far things were going quite smoothly. I started reattaching the top fuselage panel.

Mike and Tyson safety wiring the bolts holding on the propeller

Tyson safety wired these bolts with fewer mistakes. Then, the last step is to put the nose cone on. If you look at the picture to the left or above, you’ll notice that the screw holes in the bulk head aren’t evenly spaced. Tyson and Mike had misaligned the bulkhead relative to the propeller.

We quit for the night, knowing that first thing in the morning we would take half the project back apart.

Sunday morning we all showed up early at the hangar. Mike snipped the safety wires. I unscrewed the bolts. Tyson turned the bulkhead left by one bolt. Then we put it all back together. This being the third run, Tyson and Mike got the safety wire right the first time and it looked quite nice. We ran into one more problem before all was done. 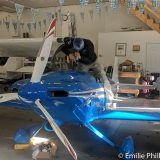 Emilie closing up the cowling

A small piece of metal stuck in one nut plate on the rim of the bulkhead. We couldn’t get the screw in. The piece punched out of the bulkhead to make the screw hole had gotten stuck. It came out with a bit of drilling and poking. 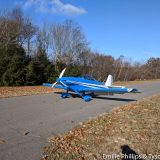 Tyson took the RV-4 out for it’s test flight. Mike and I watched from the side of the runway.

“Need to set the idle higher,” Mike commented, “the lighter prop doesn’t have enough inertia to keep the engine running.”

Tyson tried again with similar results. Later that day, we flew it over to my mechanic’s so he could adjust the throttle idle setting up to 700rpm. Tyson was very careful not to pull the throttle all the way back on landing. It hasn’t quit on us since then, but it idles quite rough.

As for performance, Catto advertised we would get static (not moving, brakes locked), 2360 rotations per minute. We used to get approximately 2100rpm with the old propeller near sea level. Tyson saw more like 2200rpm with the new propeller static. Not as much improvement as Catto had advertised, but we tested in dense 32F air, so in the summer it should do better.

However, we don’t have exact numbers for comparison but, both Tyson and I felt at 50kts, the new propeller spins a lot faster than the old one. And the distance to climb above the trees was shorter.

High speed cruise is much quieter. So much so that I have to watch out I don’t hit red line.

I need to go try some engine outs to see how the propeller behaves there. I’m going to be a little nervous about the propeller stopping until I’ve tested the idle setting a bunch. I should try short landings at a long runway to see if I notice the difference from the prop air resistance.

All in all, it looks like it’ll be a good upgrade.

All photos from installation and testing 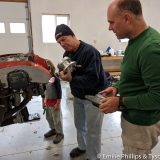 Mike and Tyson test fitting everything

The Catto manual was helpful

Test assembly on the ground 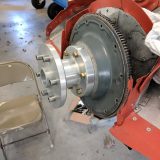 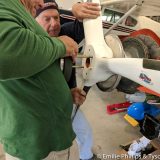 Propeller and crush plates going on

Mike and Tyson safety wiring the bolts holding on the propeller 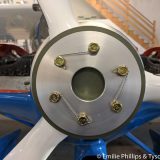 Final (second round) of safety wire

Emilie closing up the cowling 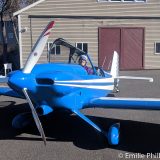