Johan Wirsén first designed a Greenland style kayak for Tahe Marine — the Tahe Marine Greenland. Then that design moved to Zegul, and now Johan is selling his kayak designs under the Rebel brand. The Rebel Ilaga is the closest to the original Tahe, so how similar is it?

A few weeks ago, I had a chance to try my father’s Rebel Ilaga for a day. I have paddled a Tahe Marine Greenland since 2010. Both designs are composite, low volume, hard chine kayaks set up for touring or rolling.

The two kayaks I’m comparing are

Tahe Greenland and Anas Acuta on a rocky Maine Island

Rock gardening in the Tahe

Edging the Ilaga felt the same as my Tahe. Both have more primary stability than a skin on frame, but less than an Anas Acuta. I can initiate a turn with a slight weight shift, just enough to drop one edge by an inch. Too much edge, and the back deck scoops water, hindering the turn.

Emptying a skin on frame over the Ilaga

The Ilaga deck height is the same as the Tahe. My toes fit, slightly tipped. T rescues were easy, and emptying a flooded skin on frame was doable by myself.

The Tahe Greenland came in two cockpit sizes — OC (smaller) and LC (larger). The Rebel Ilaga cockpit matches the LC. The specs for both are 57x40cm. My Seals spray skirt was easy to put on and take off, and it kept the water out. The cockpit opening is bigger than a true Greenland cockpit, but a good compromise for getting out quickly in surf.

Forward finishing roll in a Naja

I practiced a standard Greenland roll and a lay back hand roll in the Ilaga. The Ilaga seemed about the same as my Tahe, though I haven’t been stretching enough recently, so I felt stiff. I didn’t do any combat rolls.

Previously, I have paddled the smaller Rebel Naja. It is noticeably easier to roll, but, consequentially, too small for me to use as a touring boat.

Neither the Ilaga nor the Tahe have all the features of a British touring kayaking.

Paddle storage on the Tahe

The Ilaga has more deck bungees than the Tahe Greenland. Neither has full perimeter deck lines. On the Tahe, the furthest forward bungee is just fore of the front hatch. That bungee has a ball on it and it’s wide enough to stow two paddles. The Ilaga has two bungees on the bow: one by the hatch like the Tahe, but without a ball, and one narrower bungee farther toward the bow with a ball. This new front bungee only fits one paddle

When rolling and when doing rescues, I found the new deck arrangement problematic. I couldn’t stow both my spare paddle and my primary paddle. Luckily, it’s easy to rerigg bungees and move the ball back to the wider bungee.

My Dad’s got his Ilaga in the lightest layup, the Sandwich Pro. It weighs 17.3kg (38lb). My Tahe was the standard fiberglass layup. From the specs, my Tahe should be around 23kg (50lb). Tahe did sell a carbon layup that should have been 17kg.

The difference in weight is significant for handling the boat onshore. I can, pick up my Tahe solo, but I’d rather get help. The Ilaga, I could easily pick up by the front of the cockpit and carry it where I wanted on the beach. I didn’t notice a difference in the water.

This summer I’d asked Turner what happens when you crack the fancy carbon layup on a rock. He said you can patch the honeycomb carbon layups just the same as a fiberglass boat. The patch will be heavier than the original carbon.

The hatches were slightly harder to use.

Both kayaks have similar looking big round Kayaksport hatch covers. The hatches are in the same locations. The front and rear hatches fit a helmet and reasonable size dry bags. I’ve never had an issue with my hatch covers. However I pinched myself twice using the covers on the Ilaga. I’m not sure what made them different.

Turner Wilson outfits the Rebel kayaks he sells with a foam backrest and foam masik to best emulate a proper Greenland qajaq. I am less of a traditional Greenland paddler, so I prefer the extra knee room from an unpadded coaming. I also prefer the factory seat in my Tahe because I can stash my water bladder behind the seat and my sponge beside it. There’s no day hatch, so anything I need during the paddle needs to be in my PFD or in the cockpit.

I can’t evaluate how the Ilaga behaves in the wind, because it was only blowing 5mph the day I tested the Ilaga. 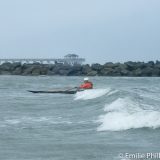 Surfing a small wave in the Ilaga

Similarly, the waves were all small. On the small waves, the two kayaks seemed similar. These kayaks have fast hulls and not much volume in the bow. Once I catch a wave, I learned at a surf clinic with John Carmody, I need to back paddle to keep the bow out of the water. If your primary goal for your Greenland kayak is surfing, the Anas Acuta is a better choice.

I regret to say, I didn’t think of paddling the Ilaga as fast as possible, so I can’t say if the bow wave is the same.

At first glance, the Ilaga looks good. But so does my Tahe. The Tahe Greenland had a reputation for the back deck cracking, but mine never has. My Tahe has held up well on occasional rock gardening expeditions, especially once I added keel and chine strips. I did not approach any rocks in my Dad’s Ilaga.

The Rebel Ilaga is a minor update to the Tahe Marine Greenland. If you are looking for a low volume, composite kayak, the Rebel line is the way to go.