Early morning ski down the Alexandria

The early season snow has been good this year. Cardigan Lodge measured 21 inches at their stake. We were already headed to Cardigan for a ski leader training day, and Tyson’s parents could watch Isaac. We decided to stay the night so we could ski a lap before the meeting.

We departed the lodge at 6:30 AM. The sun wasn’t up yet, but there was enough blue light to see by without turning on our headlamps. It had stopped snowing and was now lightly drizzling. A few snowshoers left track ahead of us in the 2 inches of fresh snow.

The route to the bottom of the Alexandria ski trail is fairly direct. Straight on the old woods road to the Holt Trail where the snowshoe tracks went straight. Turn left and ride down to a small bridge not quite covered with snow. Then follow the hiking trail up, farther than I remembered, to the large Croo bridge and then to Grand Junction. The trail had plenty of snow. Saturday, snowshoers had tramped down the top 6 inches of snow on the Holt Trail, giving us a firm base we could cruise on. I could tell it was snowshoers who had broken the trail because the track meandered. Skiers go straight.

The side hill after the Croo bridge was weeping water. Later in the winter, it freezes up and the snow levels out the trail. We skied up around the bare spot and then continued to Grand Junction.

At Grand Junction, we turned off the packed snowshoe track onto the Alexandria ski trail. This is a wider ski-only trail with room to turn. Most of the snow was untracked. Six or so deep ski tracks descended the trail. It looked like they had skied on a fresh 8 inch snow fall on top of a firm base. Since then the untracked snow had packed down and stiffened. Combined with a hint of crust from the now freezing rain, it looked challenging to ski.

At the very bottom, we found an open stream crossing. The banks of snow rose four feet sheer up from the stream bed. I found a spot 2 feet wide and side stepped across, knocking off much of the snow in the process. Tyson managed to follow on what was left.

We followed a lightly broken skin track up the side. Whomever had set it was short, or the tree branches had bent down since they skied. Especially higher up on the climb, the tree branches were crusty with hard white snow. When I took my pack off at the top, I found it was coated in a papery layer of ice.

I noticed I was sitting way back on my skis to stop the bumps from throwing me forward. With my weight that far back, the skis don’t want to turn. Tyson solved the same forward-backward balance problem by bending his knees really low. The thick snow stopped any attempts to rotate skis or side slip. So that leaves carving turns where the skis stay in the snow, step turns, or jump turns. The photographic evidence suggests I did many stepped wedge turns and a few carved turns.

Despite many falls, I got enough turns to be happy. Tyson did similarly. In no time, we were back to the bottom of the Alexandria. The stream crossing was now wider and steeper from us knocking snow down on the way up. Tyson crossed back first. He scraped some more snow into the stream and slid the tail of one ski into the water. I carefully planned my route. It didn’t work out. I slid backwards into the stream. Luckily the water was shallow so only my skis got wet.

From there down to the lodge, we were back on the snowshoe trail. We zipped down the Holt trail like a luge run. Tyson said that part was as fun as skiing the Alexandria proper. We arrived at the parking lot just a minute late for our meeting.

Tyson starting out from Cardigan Lodge

Up the Manning Trail

Tyson just past the Croo bridge

Emilie crossing the stream at the bottom of the Alexandria

Tyson crossing the stream at the bottom of the Alexandria

Tyson skinning up the Alexandria

Emilie skinning up the Alexandria

Emergency cache on the Alexandria

Iced over snow on branches

The view at the top of the Alexandria ski trail

Emilie looking apprehensive at the snow

Good day for helmet and goggles

Tyson in the mist

Last descent on the Alexandria 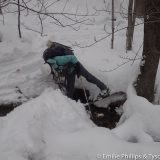 Emilie climbing back out of the stream