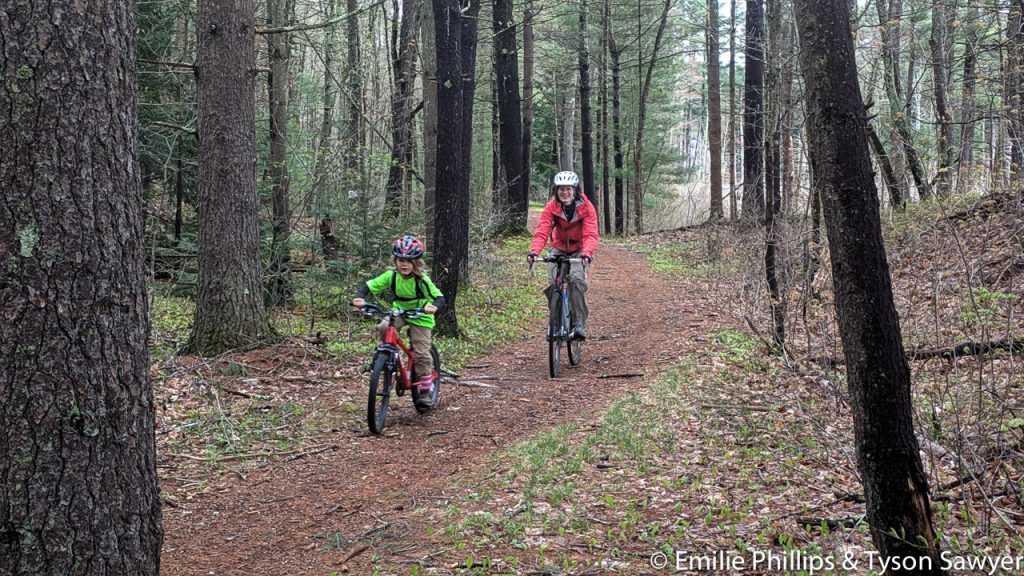 We bicycled to the new soft serve ice cream bar, Sundae Drive, near the Milford town line and the high point on Rt 13. Our weekend was already full preparing for our Utah vacation, so we only had time for a short bike ride.

Issac’s goal for the year is to bicycle as far as Tyson bicycles to work, about 40 miles. I need to exercise or the trip planning stress overwhelms me. And Tyson just wants an excuse for ice cream. Sundae Drive was the closest ice cream shop open that Saturday. It is new as of last fall. We hadn’t tried yet.

We paralleled Rt 13 on the dirt and gravel Granite Town Rail Trail. It’s level, and we don’t have to worry about traffic unlike on the roads. Just getting from home to the rail trail on Mason Rd, Isaac lost control of his bike on a steep section and almost crashed.

Along the rail trail, the trees had budded out in false fall colors of red and orange. Spring was farther along on the ground where green mayflower leaves stippled the ground. We found one snowmobile trail junction where the railroad grade crossed another other snowmobile trail on a bridge. There were on ramps and off ramps to switch trails. Farther north in the Palmer Wildlife Refuge, we watched painted turtles sunning on logs.

At the Milford line, we crossed over to Rt 13 on the power line cut. The access road was too steep for Isaac. He had to push his bike up. Then we turned right onto Rt 13’s wide shoulder, and in a minute arrived at the ice cream shop with no mishaps.

The ice cream was reasonable. As is typical around here, the serving was giant. I tried one of their brownies and it was a little dry. Isaac almost lost his ice cream off his cone. We rescued it with a dish.

Our original plan was to take two right turns to get back to the power line. Given how well Isaac had been bicycling, I proposed we instead continue south on Rt 13, downhill to the Bartell trailhead. We did so and were quickly back on the rail trail.

We could have followed the rail trail back to Mason Rd and then the road up to the house. Instead, Tyson and I wanted to try a route we have skied and hiked, but never bicycled: west on North Mason road, up the paved part of Ben Farnsworth Rd, and back down the class 6 unmaintained part of the road to the end of our neighborhood.

The paved roads were nice: less traffic than Mason Rd and a more gradual grade. Isaac still found it an interminable climb, but he did it. We paused for a snack at the top. The class 6 road was in good shape. No washouts or downed trees, only a few wet spots and fist sized rocks. We picked our way down the hill. Isaac said it was really hard braking all the way down the hill. He also said it was fun. 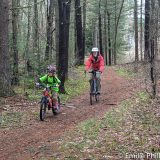 Isaac and Emilie bicycling north on the bike path 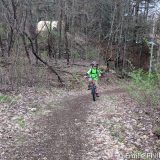 The one detour off the old rail grade 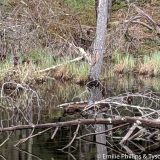 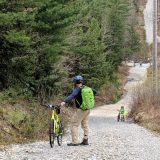 Steep uphill under the power lines

Tyson followed Isaac through the trees 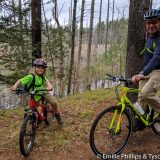 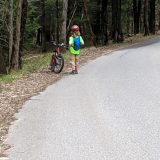 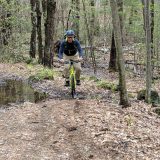 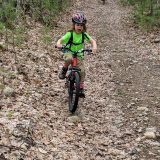