There haven’t been many regional flying events this year, and we have been cautious of attending the larger national events. However, in the last month, there have been interesting happenings at our home airport.

End of September Jody and Dave, the newest homeowners on the airport, brought a Murphy Moose home from Pennsylvania. It is a bush plane inspired experimental, but bigger than our Bearhawk. It has six seats and plenty of baggage. See the manufacturer’s website for more details. This particular Moose had not been flown much since being built — only 200 hours. It’s in good shape, but hasn’t had all it’s infancy issues worked out.

All the neighbors came to see the new plane -- Comments (0)

Our long time neighbors Mike and Laura have retired and sold their house. They were the social organizers of the neighborhood. They held one last party to say bye to all their friends. Most people drove, but a few folks flew in. For social distancing, the party was held outside and it kind of morphed into a block party up and down the runway neighborhood.

Mouse wondering where the ground is -- Comments (0) 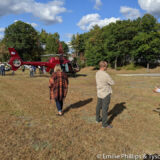 Jody and Dave are picking up the social slack. They come from Crow Island which holds frequent barbeque cookouts, pancake breakfasts, and camp outs. This past Saturday, they put on the first pancake breakfast that I know of at Brookline. I had been wishing our airport could host such an event, but I wasn’t sure if it was safe to invite the public into our short runway. Jody and Dave spread the invite to friends, and friends of friends. Then it got onto facebook. I don’t know how things would have turned out had the weather been nice, but we woke to gusty winds varying from 0kts to 25kts cross wind. Few people want to fly in that kind of wind. A bunch of the Crow Island folks drove over. Ryan and Laura and their daughter flew in from Eagle’s Nest. They had considered purchasing Mike and Laura’s house, which would have been excellent for us since their daughter is near Isaac’s age. But instead they picked a house on a private airport community in New London. We are invited to come up and visit. Three other planes flew in and everything went smoothly.

I joked with Isaac that we should fly to the pancake breakfast. He preferred to walk over and get first in line for chocolate chip pancakes. Tyson took me up on the idea and flew to breakfast via a fuel stop at Jaffrey. I thought the winds were too strong to fly on an empty stomach, so I flew home after breakfast.

Testing the tach on the Moose -- Comments (0)